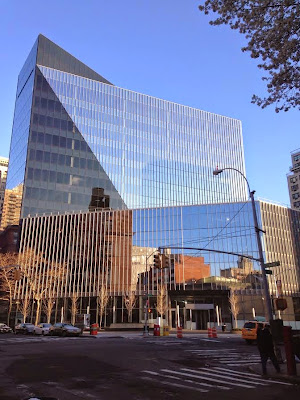 The building still has some 75,000 square feet to lease … not to mention the three retail storefronts, which total roughly 15,500 square feet.

Developer Edward Minskoff "estimated that the last of the office space would be spoken for in about 45 to 50 days. The building is seeing about five or six tenant showings a week, sources said."

And now we're off to brush up on our old sayings…
Posted by Grieve at 4:50 AM

It certainly is shiny!

BOW DOWN BEFORE ME, CRETINS!

Came back to the old neighborhood, to visit Mom's and was greeted by yet another heartbreaking symbol of disrespect to our town. This fucking ugly thing full of similarly dull but shiny people. (Some people are ok I guess, but tell me im wrong)

In this photo it looks like a prison from the future.