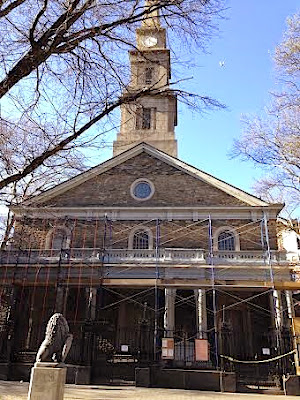 The scaffolding went up Monday at St. Mark's Church in-the-Bowery, where workers will be testing and repairing the portico for the next several months.

In June of 2012 St. Mark’s won a grant for $135,000 from Partners in Preservation towards the restoration of the historic cast iron Bogardus portico. The portico is the gray “porch” that frames the entrance to St. Mark’s. The portico includes the cast iron frame and pillars and the stone floor.

With the initial grant of $135,000, we have been able to raise some additional funds and plan to raise even more to both restore the floor of the portico and repair the cast iron plinths, pillars and balcony. The image on this page is what they look like now. The stone is worn and chipped, and the iron is rusted and failing in some areas.

In addition, we have received approval from the city of New York’s Landmarks Preservation Commission to develop an accessibility ramp with rails. That sentence should have been longer because getting this approval was an epic journey, but now that we have it, we have another epic journey ahead.

Our next steps are to raise the money and schedule the construction. You will see some construction this Summer (2014) because we have to spend the PiP winnings this Summer, but if we have not raised enough money to do all the work, you will see construction again until we have a restored and accessible entry to the church. The building will be open and functioning during construction. 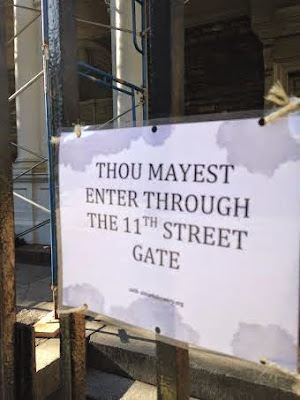