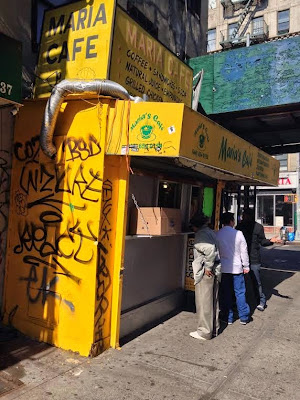 Maria's Cafe left its longtime corner stand at East Third Street and Avenue C back in January for a new gig in West Harlem.

Last week, some people were surprised to see Maria's back open here for business. Maria said that they're still at the place in Harlem during the week, but they'll be open on Saturdays and Sundays for the foreseeable future.

As a neighborhood tipster has told us last year, several of the small buildings here at the southeast corner of East Third Street and Avenue C will be demolished in the near future to make way for a new residential complex. (There's still nothing on file with the Department of Buildings to indicate any impending demolition.)

Anyway, enjoy Maria's strong coffee and inexpensive breakfast fare while you still can.

Thanks to EVG reader Billy for the tip!

Thanks for the tip, will head over this weekend!

I don't believe the neighborhood tipster. Keep the buildings! No yup dorms!

Keep the buildings? There has been an abandoned bodega there for years and the the entire building looks structurally unsound. Not rooting for a "yup dorm" but the current structure needs to go.