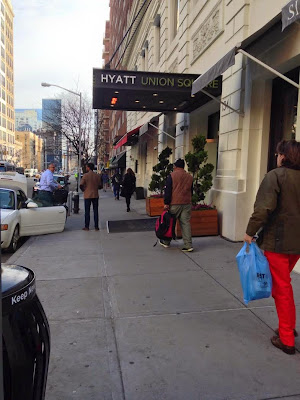 As previously reported, several nearby residents had concerns about a proposal for a sidewalk cafe with 13 tables and 26 chairs at The Fourth, the ground-floor restaurant located in the Hyatt Union Square.

Community Board 2 issued a denial for the cafe back on March 20, even after reps for The Fourth agreed to 12 tables and 24 seats. Residents wanted the number of tables here reduced to six (with 12 seats) to better fit the space on Fourth Avenue at East 13th Street.

With this application, they are claiming that their diners will sit shoulder to shoulder while pinned against the wall to be in compliance. Even if diners were willing to sit that way (at a very expensive restaurant), would the restaurant then turn away anyone with above average or particularly large shoulders? Of course they would not and it would not even be legal to do so. Even in the best case scenario, it is clear that this cafe, as proposed, will not comply with city regulations. There is simply not enough room for 2 persons to sit side by side on this sidewalk and be in compliance with the law. What they have proposed is impossible.

City Council weighed in on this yesterday ... and the residents were able to get the smaller 12-seat cafe, per their wishes.

"I'm still skeptical as to how they might implement it to be greedy with space," said one resident, who noted that District 2 Councilmember Rosie Mendez was "a helpful mechanism to effect this change."

Previously on EV Grieve:
Concern over a proposed sidewalk cafe for The Fourth on 4th Avenue (20 comments)
Posted by Grieve at 5:00 AM

I walked by here yesterday and remembered this bizarre request for outdoor seating. The sidewalks in this area are so uneven I can't imagine how tables would even work without jamming 100 matchbooks underneath to even them out. And it's still such a dumb place to put outdoor seating as there is nothing worth looking at over there.

There are NYU students (male and female)

There are a few homeless people and heroin addicts who will stop by as they travel between Union Square and points south.

But mostly there are NYU students, their parents, and recently graduated NYU students who now work in finance or marketing.

I am so done with this neighborhood - the change in the last couple of years has been unbelievable. Good thing is that I can sell my place quickly and easily because all the Bros (and fe-bros) want to move here.

I can't wait to move to Brooklyn - back to some diversity and creative energy like there used to be here.

I also wondered about the titled sidewalks. How are they going to keep the tables upright? Also, there is so much traffic coming up Third and turning on to 12th. It isn't the most pleasant place to sit outside.