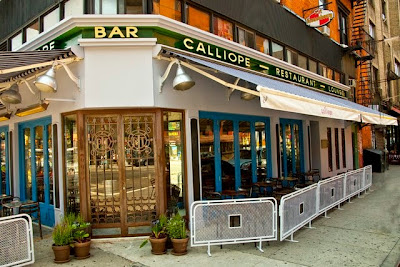 Calliope, the nearly two-year-old French bistro at 84 E. Fourth St. and Second Avenue from alums of Prune and the Waverly Inn, has closed.

However, a new venture is in the works for a seemingly speedy turnaround. Per the Calliope website:

It's one of those good news/bad news things. The bad news first: Calliope has closed. It's sad to see something that meant so much to all of us and to you come to its end... but we're putting together a new project right here in the same space. That's the good news... starting this weekend, you can come into dinner at Contrada! Full details coming soon!

Probably not a big surprise. Grub Street reported back in January that chefs Ginevra Iverson and Eric Korsh split with Calliope's financial partner, Eric Anderson, and were no longer running the restaurant.

As for Contrada... sounds like Italian is on the way. (Maybe?)

Brian Van, who passed along this tip, also notes that the now-former Calliope interior is undergoing a minor rehab. The tables and chairs are all stacked but intact. 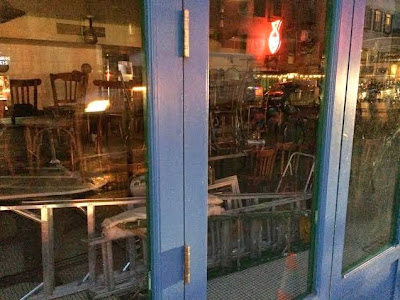 The space here was previously home to Belcourt, which, like Calliope, we never tried.

Email ThisBlogThis!Share to TwitterShare to FacebookShare to Pinterest
Labels: Calliope

How about a laundromat.

how many more restaurant changes for this friggin' spot?

I hated Calliope. Overpriced and no regard for neighborhood. The facade was wide open, could hear the crowd like five blocks away.

I ate there once on the first day that they opened after Sandy. They only had appetizers. They were good. the prices in general were high & similar to all the restaurants in the EV. They were always really busy so it's depressing that they are closing. Perhaps it's more of a "partner" type decision.

Calliope wasn't here all that long. It replaced another French restaurant which was just as good. Second Avenue just can't seem to hold restaurants for very long below 5th Street. Bouki's, the Greek restaurant, already in its second incarnation, is also looking like it is closed with stacked tables and chairs for weeks while the sign still says Closed for Renovations.

This place hasn't been full of diners since the Cucina de Pescae people ran Fruiti de Mara here. That's the last time it was affordable. I doubt the new place will be affordable either, and give it a year, and it will be something else. Saturation point, anyone?

that block exists to sell legal drugs to people, thats it.

Never set foot in there. It seemed noisy and somewhat pretentious. I looked in a few times, but did not find it inviting. Don't like tile floors in restaurants, they amplify the noise. Don't like to eat my annual steak au poivre in a noisy environment. I realize that it could be an age related aversion.
As always, YMMV

Wasn't this also where Frutti di Mare was, years ago? That place wasn't so bad.