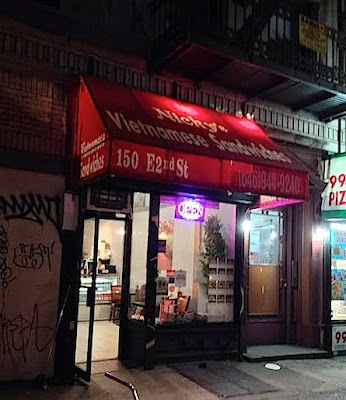 EVG regular RyanAvenueA pointed out that a Nicky's Vietnamese Sandwiches just reopened on East Second Street east of Avenue A.

So to quickly recap the recent history here:

The folks at the all-new Nicky's said that they are the original Nicky's.

HOWEVER. We later emailed the family who ran the original Nicky's (and who still have two restaurants in NYC). Here's what they had to say:

"No. They are not the original Nicky's. We only have two locations now. One in the Financial District and one in downtown Brooklyn."

A family member said that they are aware of the name use here, but that it was OK.

On closer inspection, the menu for the new Nicky's looks similar to Vicky's… 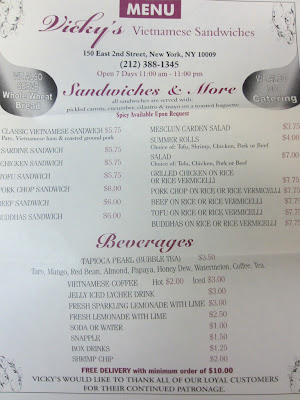 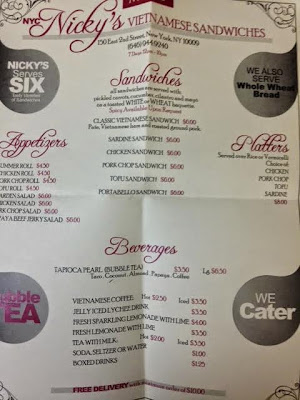 Previously on EV Grieve:
Nicky's Vietnamese Sandwiches leaving the East Village?
Posted by Grieve at 5:05 AM

Email ThisBlogThis!Share to TwitterShare to FacebookShare to Pinterest
Labels: Nicky's

As long as the banh mi is good I don't really care what name they use.

What's with the weird reference to Nikki Sixx of Motley Crüe?

I always thought Nicky's was way superior to Zon, even though I live practically next-door to Zon. I had a sandwich from Zon the other day and it was so salty I thought I was going to have a stroke from my sodium headache. Long live Nicky's/Vicky's/whatever!

Zon is a little different. They have those pork patties which are really good.

Zon's sandwiches are pretty much equal to Nicky's, but Zon's summer rolls are waaaaayyyy better.

I guess this is some form of flattery or a page taken from Samsung and their iPhone copies.

Why don't they just name it Icky's and be done with it? Honestly, we're close enough to Ch'town, where the things are 2/3 of the price and 3/2 of the taste.

I tried all types of vietnamese sandwich and Nicky's is still far the best and the original owner is back and the owner is very friendly.