Bar Veloce hostage crisis from 2002 is dramatized for TV tonight 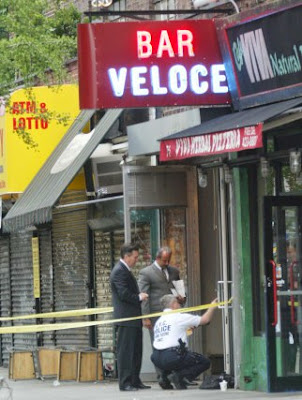 In June 2002, an unemployed Brooklyn barber named Steven Johnson armed with three pistols, a 30-inch sword and kerosene held 40 patrons hostage at Bar Veloce on Second Avenue. (Read the account of this at the Times right here.) Three people were shot in total.

And this ugly rampage gets a documentary-style re-creation on the Investigation Discovery network tonight at 10. (Channel 23 on Time Warner cable.) Here's the description for this episode of "House of Horrors: Kidnapped" titled "A Madman Walks Into a Bar" —

When a crazed gunman storms into an East Village bar, Ann-Margret Gidley and her friends scramble for a way to escape. Trapped in a back room with no way out, Ann-Margret must summon a strength she didn’t know she had to take down the shooter.

In March 2013, a judge sentenced Johnson to 240 years in prison. In closing, Johnson reportedly told Manhattan Supreme Court Justice Daniel FitzGerald, "I'd just like to say, fuck you and suck my dick."
Posted by Grieve at 8:40 PM

I live two blocks away, how the heck did I miss hearing about this?

I was there . Mr iso from the restaurant snuck through the back door and was shot in the hand. That ended it all

Ah, Discovery Channel, where you and your kids can "discover" all those fake things like the infamous Shark Week special called "Megalodon: The Monster Shark That Lives. " Yes, they told all their viewers Megladon lives, and even hired actors to play fake shark hunters, when actually it's a shark that has been extinct for over a million years. I bet they shot the whole Bar Veloce episode in Toronto.

It sounds like a great premise. With a maximum length of 60 feet and teeth the size of butchers’ knives, the megalodon is one of history’s most fearsome predators. There’s only one problem: Despite what the show’s title may claim, this “monster shark” has been extinct for more than one million years.

Those watching the “documentary,” however, were not burdened with such inconvenient truths. Instead, Discovery hired actors to play marine biologists on a hunt for the megalodon around the coast of South Africa. Their expedition is mounted following the release of (faked) footage showing a fishing vessel taken down by a massive sea-dwelling predator (nicknamed “submarine”).

More fabricated “evidence” supporting the creature’s existence is presented, including a whale whose tail has been bitten off by an unknown animal, and a Coast Guard video showing a giant, shark-like shape moving through the water.

Viewers, perhaps accustomed to trusting a channel that calls itself “the world’s #1 non-fiction media company” (as Christie Wilcox of Discover magazine points out), were apparently convinced by all the smoke and mirrors (and CGI). A post-show poll shows 79 percent of respondents, as of Tuesday evening. believed the megalodon is still alive after watching the documentary. Only 27 percent said they thought the shark was extinct and “the scientists are right.”

That Al Baker NYT story is beautifully written, better than, say, your usual Talk of the Town piece.

I wonder what happened to the shooter's ten year old son?

Ann-Marget is one brave woman. She should have gotten a medal for heroism.

Was this the guy spraying everyone with the kerosene or was that a different guy?

This is America! CCW!