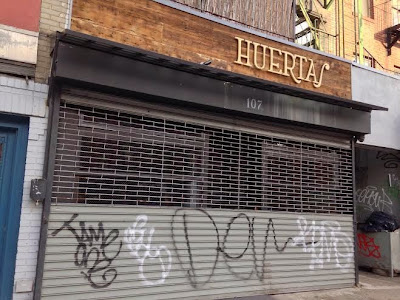 We've been watching the progress over at 107 First Ave. between East Sixth Street and East Seventh Street, where Huertas, a restaurant featuring "the cuisine of Northern Spain," is set to debut.

Fork in the Road reports that chef-owner Jonah Miller will officially open the doors tomorrow evening (they've been in soft-open mode since last Tuesday).

Here's more about Miller, who started working in restaurants in the city at age 14, via FITR:

Miller's inspiration comes from a variety of experiences. "When I was coming up, it was a time when Spain was influencing cooking throughout the world," he says. "That and the fact that Spanish was spoken in kitchens made me want to study abroad in Spain in college. When I was there, I realized the experience of eating in Madrid is not really available in New York."

So he built it, giving an East Village space a revamp to make it feel old — "We want people to feel like they've been here before," he explains …

This address was previously home to L'asso EV, the pizzeria that closed in July 2013.

Here's is the restaurant's website with more info and menus and stuff.

Previously on EV Grieve:
Huertas, opening this spring on First Avenue
Posted by Grieve at 4:59 AM

Email ThisBlogThis!Share to TwitterShare to FacebookShare to Pinterest
Labels: Huertas

I have been to Madrid and northern Spain, and a great thing about the food is that the snacks or Pintxos are about 1-3 euros and the wine or cider is cheaper than a bottled water. People can afford to try them and they crowd around the best places. $11 for a slice of omelet? This place is missing the point.

Fennel in rice pudding? Dear God, the barbarians are at the gates.

So Jonah Miller built it, "giving an East Village space a revamp to make it feel old — "We want people to feel like they've been here before," he explains …
the point being everything "old" was forced to move out due to huge rent increases and now something new can come in and try to replicate what we had and lost.
i don't want to feel like i've been someplace new before, i want to continue to go to the places i did go to before.
gez, how fucked up.

OK So what about that horrible graffiti? does anyone care? that when the resturant closes for the night this trash is displayed on the street?

@JoeyBlau, that graffiti may be part of the "old East Village vibe" they seem to want to cultivate. And I agree with blueglass.

I predict a swift closing. No real options for meals - daily menu - and the prices are way too high.

An olive, and an anchovie in toothpick =$11.
A teaspoonful of mushrooms and garlic=$10.
A forkful of shredded potato and one runny egg on top =$8.
Poor man's sangria=$9
And that's the price for now, just to lure in the foodiebles (gullible foodies). Wait a couple of months when they jack those up for the moneyed tourists and trustfunders (see also Le Philosophe). Remember back in the good ol' bad days of NYC where drug dealers offer one drugs for free or reduced price for their first time customers, only to get you hooked and then jack up the price afterwards? same concept here. Pretentious foodie food is the new crack.

So if one wants to have a grab-and-eat and a drink as they go, they're out $40-$50 in about 45 mins. and still hungry and unsatisfied and wanting more.

Plus, they don't have a full liquor license, thus they have to make up the profit margin on the very small potions of food and overpriced craft beers and wine. Their sangria should be renamed Poor Man's Sangria Overpaid for by the Riches.

This is what happened when foodie restaurants trends novelty dies down; their cult members need something new to consume and remain hip. The Momufukers will surely flock this trendy foodie joint. Right next door is Ugly Kitchen. This place should be named Ugly restaurant for the uglies. This place is perfect for the Nuevo East Village.