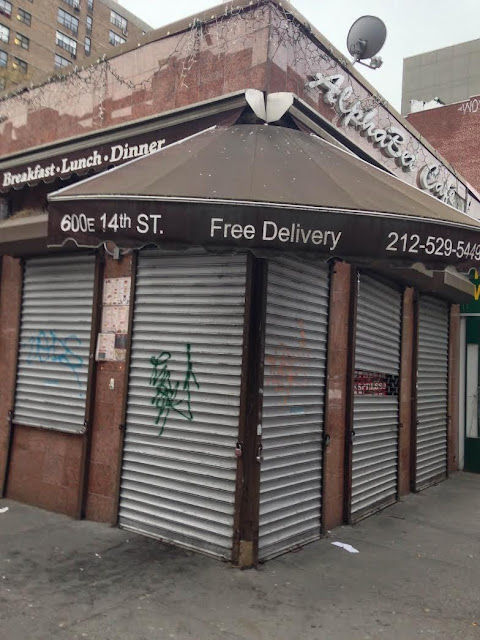 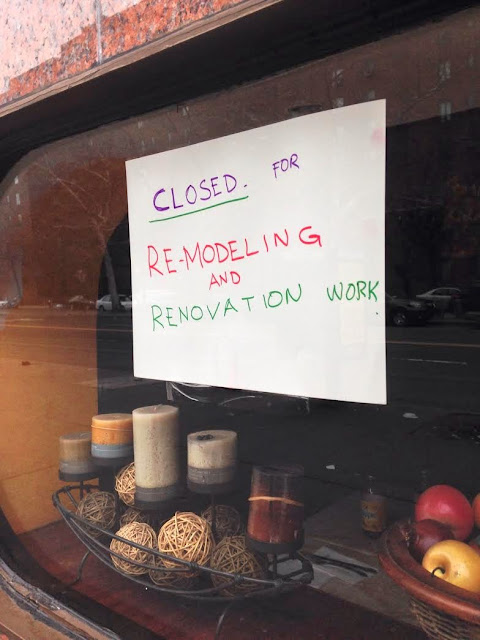 However, yesterday, EVG reader Patrick heard from the building's landlord that AlphaBet Cafe will NOT be returning… the gate was up and workers were inside cleaning out the space. The landlord said that the Cafe owners had been behind in rent … and they voluntarily turned over the keys ahead of an eviction.

The landlord indicated that he did have an interested party in the restaurant… and hoped to have it rented in the coming weeks.

Previously on EV Grieve:
AlphaBet Cafe is closed for renovations
Posted by Grieve at 5:06 AM

Seroiusly, if someone ever lit those candles sitting right on top of the dried up balls of string, they better have a couple of fire trucks waiting outside with hoses ready. That little window decoration is an arsonists dream.

It seems like the diner is pretty much be a thing of the past in NYC.

Some please open an artisanal diner so I can still get a tuna melt or good BLT sandwich once in a while. The population needed to support diners is aging or moving away from the neighborhood unfortunately. Just about every restaurants which opens has a famous chef which is really a tired cliche by now. I don't need a celebrity to serve me 2 eggs over easy with hash browns.

no way is the diner dead yet!
stage
edison
johny's
square
neil's
new amity
and that's just a few! keep eating there and keep em open! I'll get fatter than I already am if I have to do it all by myself!:)

Whoever signs a 5 year or 10 year or longer lease is going to cater to all those new condo people on 14th Street.

I did stop by New Amity with my boyfriend in January.. and they were PACKED for lunch in the middle of the week. Lots of older people living by the museum though. However, I agree, the diner is pretty much dead and it's sad because my dad was a New Yorker (later moved to the midwest where I was born and then I moved her in 1989) and loved to take me to the diners and talked about them all the time. If he was alive he'd be heartbroken to see the city as it is, with the chain restaurants!

When it was Dynasty Diner, it was filthy and disgusting inside but the food was pretty damn good. Then they changed the decor and I think the people that work in there as well, and the food really got horrible. It alternated between being tasteless and being funky tasting. I saw they dropped a bunch of menus off at my building last month with the new PAY HALF PLUS lunch advertised...when a place is taking 50 percent off their prices you know they don't have long to go.