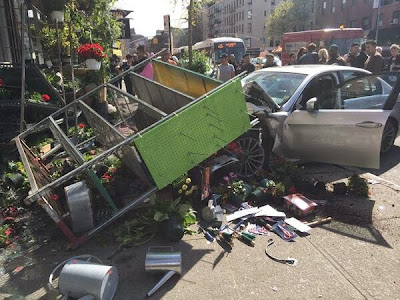 Wow. Close call on the southeast corner of First Avenue and East Seventh Street just after 4.

Per @wlodarczyk: Watched this happen from across the street. No bystanders hit, amazingly.

Here's another photo via Bill the Libertarian Anarchist... 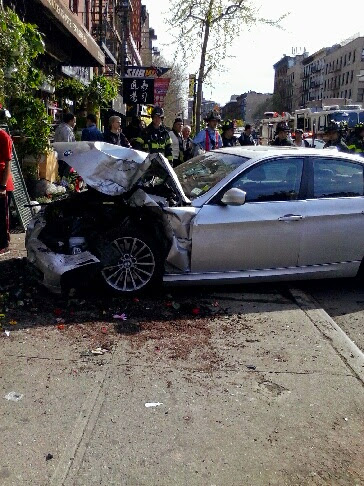 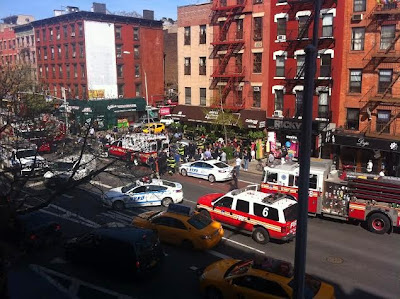 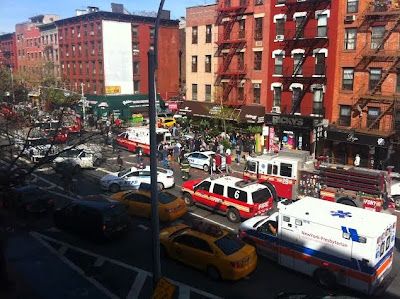 So far, there haven't been any reports of injuries...

Updated 5:05 p.m.
This is Bill the Libertarian Anarchist's report of the collision:

"At 4 pm a car traveling north on 1st Ave. (supposedly at a high rate of speed) rammed into a van (not pictured) then spun over and hit the front of the flower-hardware store on the southeast corner of 7th St. and 1st Ave ... Just before I took [the above photo], the paramedics placed the driver (then on a stretcher) into an ambulance. He was mumbling incoherently."

Updated 5:49
This photo via EVG Facebook friend Michael Hirsch shows passersby attending to the driver (in the tank top) ... 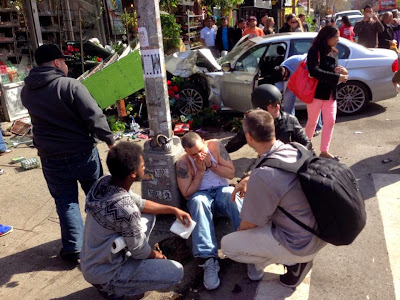 NBC New York reports that "one person was taken to Bellevue Hospital in serious but stable condition" ... no mention if this was the driver or a pedestrian...

The Post reports that the BMW, which was heading north up First Avenue, "crashed into a parked van and then careened into" the store.

Saifee executive manager Mike Taheraly said that the plants out front "took most of the impact," and that the accident destroyed some $15,000 in merchandise.

As for the driver: "Witnesses claimed the BMW was speeding, but authorities said there was no criminality in the smash-up."

Holy $hit!! I hope it's true that no one was hurt.

WTF? What is this, open season on East Village storefronts? The deli on Second Avenue, the optical store on 14th and 2nd, now this? The hell!

I recall they were very kind post Sandy, helping the 'hood recharge gadgets. Wish them a speedy recovery.

Yikes, really busy corner to begin with, in addition to the Saifee guys who are always out there bringing stuff in/out from the basement. Remarkable that no pedestrians/bystanders were hurt.

Of course it has to be a BEAMER. *eye roll*

This is terrifying and takes me back to that poor deli man who was run down. How can we get drivers in our neighborhood to slow down?

If only there were some group of people who wore uniforms and had the responsibility to enforce laws. Maybe they could have a slogan like "courtesy, professionalism, and respect".

Perhaps this group of people could watch these reckless, speeding drivers and stop or "arrest" them before they cause damage and injure other people.

OR maybe they could spend their time harassing cyclists and young black men, beating up OWS protesters, and ticketing delivery trucks.

My understanding is that the law against speeding, reckless endangerment, etc. are poorly enforced in NY, presumably because of payoffs and kickbacks to pols.
This sort of action should result in hard jail time for the offender, and a permanent suspension of his driver's license.

These Grand Theft Auto douches need to quit drag racing in the city.

Seriously everyone when out on the streets / sidewalks please pay attention to what is happing around you. People walking around with earplugs listening to music and then further distracted by texting can get killed, this kind of thing comes out of nowhere and that's it you're dead. We have our senses for a reason to alert us to danger, use them.

Anyone who flips a car here should be banned from the city for life. Pilloried too.

I was shopping at Saifee when this happened. We heard screeching, followed by a huge crash, and everyone ran toward the back of the store as shards of glass went flying. After a couple minutes someone roped off the hazardous areas, and the store went back to business as usual. Emergency responders arrived within 3 minutes.

Hardly any of this shit happened before they put in bike lanes.

"Hardly any of this shit happened before they put in bike lanes."
That is total b.s. Evidence? You got zero.

Anonymous 8:02, Good point! I heard the sea level was rising too, since the bike lanes went in.

Some people will do almost anything to get to that 30% off sale at Kim's Video.

There is a bill pending right how to reduce all one way streets in NYC to 25 MPH (plus re-synchronization and eventual camera enforcement hopefully). Write your reps.

It's those bike lanes again. Knew the city should never have let those happen.

Saifee Hardware really was great post-Sandy; I was even able to buy a gallon of kerosene there for our lamps! (Don't tell anyone, but I kind of loved camping out indoors after Sandy.)

They're really a community-minded store, and I really love that they're independent.

Anon 6:37 - when a car spins out of control onto a sidewalk, whether or not you can hear it barreling at you at a high speed isn't going to make a difference.

I was on that corner an hour before. Amazing no pedestrians or workers at Sajfee were hurt.

Kindest group of guys ever. I love the entire staff! This was one of my daily stops for my bar fixing needs. I wish them well.

Lucky no fatalities. More enforcement is needed, though... and yes, what everyone else said about the Beemer... ridiculous and unfair. ESPECIALLY so close to a school! (only four blocks north)

any news on the driver who caused the crash?

Dearest Roxana and all the well wishers who have posted above and the many who stopped by to say a kind word, on behalf of staff and family of Saifee Hardware, I would like to thank you for all your support and good wishes. We are very grateful that no pedestrians, customers or staff got hurt yesterday. We got very lucky!
So proud and happy to be part of the East Village community,
In gratitude,
Saifee Hardware

Back in the day that used to be Tunnel Bar and the only thing crashing into it were strung-out trannies.

No criminality huh. Why does it always sound like the drivers in these kind of smashups are getting off scott free without so much a fucking citation. Nothing.

This driver caused himself to flip his own car. Sorry but that kind of thing does not happen to law-abiding, safe drivers driving up first avenue. Losing control of own's own vehicle and smashing it into a storefront should be a crime, in a civilized world. Fuck NYPD.

One of my favorite stores in the neighborhood.

Glad no one was hurt. Saifee is a great store. Staff are friendly and knowledgeable, and they have an excellent stock of tools and garden supplies.

And how did they determine no criminality? Did they check the black box? Did they already run all drug tests on that asshole? This is really upsetting. There is no investigation unless someone gets killed or critically injured, so we let idiot drivers like this one drive around without as much as a summons until they finally kill someone.

A few years ago, my sister was hit in a sidewalk by a speeding driver who clearly ran a red light. She miraculously survived, so NYPD didn't even check surveillance tapes from the area to try to locate the driver. I don't wish this pain on anyone and it hurts me tremendously that this, and many other reckless drivers, are still on the streets without any punishment. This has to end. NYPD, get your priorities straight. Cars can be powerful weapons and people operating them need to pay consequences of reckless actions, such as speeding and not yielding to pedestrians.

"Blogger Glenn Belverio said...
Back in the day that used to be Tunnel Bar and the only thing crashing into it were strung-out trannies.

Obsession with speed is killing us.

That was never Tunnel Bar. I moved into the EV in 1968 and it was a hardware store even then, run by a very unpleasant married couple. I bought my fire-escape safety gates there. The owners sold to Saifee many years ago, with no interim bar. Unless you were talking about the corner portion of Saifee? The entrance part is the part I mean...hardware store all the way.

So he can just continue on driving now once he's feeling better? He could have killed people, WOULD have if the timing had been different - and may in the future. Our streets are not highways - they are extremely residential. We can't allow any more reckless driving here - the risk is too great. I want the authorities who keep finding no criminality to explain their findings, not just proclaim them. Look us in the face and explain yourselves dammit!! Tell us specifically why you're choosing to just let this dangerous ass right back on our streets instead of suspending his license.

Saifee Hardware used to be Tunnel Bar. I remember quite vividly. I think you mean that Saifee took over the space on the corner when Tunnel Bar closed. Check out this link:

Driver should lose his license.

I just don't see how there's "no criminality". Not even a speeding ticket? (How hard can it be to prove that, regardless of anything else, the car wouldn't have landed in the store if it wasn't speeding.)

Did anyone publish the name of the the driver? (It would be interesting to see if he has been charged with vehicular crimes in the past.) I'm sure Safiee's is insured but . . . it seems to me that the driver deserves at least a ticket, if not more serious charges.

I think songlines might be wrong on this one. Tunnel was on the far west side. I went there once or twice.

No criminality? Bull. I saw this happen in real time from just a few feet from McDonald's. He was driving beyond recklessly and at enough speed that I heard him coming and turned to see this happen. This is the same corner the police had a trap that only wrote tickets for bike violations, several months ago.
Why won't NYPD pursue moving violations?