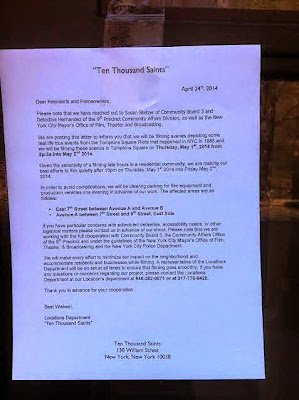 The low-budget adaption of the Eleanor Henderson novel "Ten Thousand Saints" started principal photography in the East Village back in January. To date, the filmmakers have turned part of First Avenue into Avenue D and recreated part of tent city in Tompkins Square Park to tell this straight-edge coming-of-age story set in the 1980s East Village.

Now, on Thursday, crews will be filming scenes depicting the Tompkins Square Park Riots of 1988… these carefully worded letters recently arrived on East Seventh Street and around the Park … 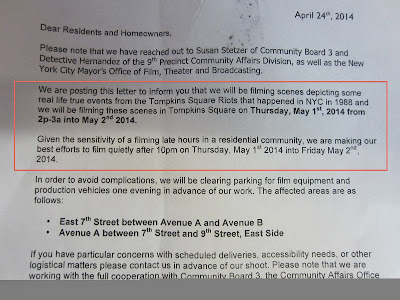 Crews will be filming from roughly 2 p.m. … till 3 a.m. Per the sign: "Given the sensitivity of filming late hours in a residential community, we are making our best efforts to film quietly after 10 p.m on Thursday, May 1 into Friday May 2."

The husband-wife team of Shari Springer Berman and Robert Pulcini direct. They directed the 2003 Harvey Pekar film "American Splendor" with Paul Giamatti.
Posted by Grieve at 5:30 AM

How cool! I'm going to be there to watch this.

I heard this is going to be a musical comedy!

American Splendor was one of the best films I have ever seen. I hope this one is just as good.

I'd suggest dressing the part and trying to be an extra for the filming. I've walked onto sets more than once and ended up in scenes, without planning to do so. So if you want to be in the scene....

Questions: How do you film the Tompkins Square Riot quietly? And when will they turn this into a Broadway Musical?

The east village is riot loud on Thursday nights already. I bet no one would have noticed.

Tell them to call damn kids bass player he was poster boy on cover of post.

Who will play Clayton?

And in the role of Clayton Patterson, Tyne Daly.

What will this do for us? Only make thigs worse. Thanks filmakers. 24 hr. a day nostalgia.

I would guess "riot" sounds will be added in post-production, although there might be some loud voices. Has anyone read the book and can they tell us if it is bias to one side or the other?

I slept through the first riot so I can hardly wait.

"….to tell this straight-edge coming-of-age story…"

That is fucking funny.

The TSP Riot was performed live at midnight on a hot summer night with a cast of hundreds, not in the middle of the afternoon with a few dozen clueless re-enactors.

I wonder who their technical adviser is, if they bothered to get one.

Oh how original. Another trendy and obvious obcession with our neighborhood. You and everyone else. Get a life. Exploitation is the new integrity.

Chris Flash, the sheet says they are arriving at 2 p.m. and shooting until 3 a.m. They will likely start shooting after dark, but they obviously have to get there hours ahead to set up.

I wonder if they're gonna try to get the actors all riled up beforehand by telling them Empire Biscuits is closed.

During the riot helicopters were flying so low that they made my building shake. It felt like they were landing on the roof. No internet or NY1 to tell me what was happening, but I knew it was bad.

Oh goodie! I'll be back that night! NO BISCUITS NO PEACE!

I know Matt Taibi is nothing like his asshole father Mike who scapegoated Missing Foundation i.e. blamed them for the riot. I just thought it'd be funny if Matt played his dad in this movie - lighten up : )

I'm shocked no one has mentioned the Memorial Day '91 riot. Is there any video footage of that one? I remember walking past the park with a friend earlier that day, just like I walked past it hours before the first riot went down.

Neithermorenoless.blogspot.com has a May 2007 entry about the second riot I can't post the link of for some strange reason so here it is:

I remember walking by a July '91 protest of the park curfew with a friend.

Will mr. Penley, and the zippies be able to advise on the movie

I hope we're going to be clear here--it was a police riot.

It was a riot riot.

They were like the KGB. Those police had that under control from the beginning. They had undercover cops in with the Rioters. You could be standing right next to someone, talking to them and they would just vanish. The cops just made people disappear. Scary!!!!!

reenactment of a riot? riot today, tomorrow, and on and on make noise, be loud. riots aren't games, nor spectator events. riot every day til its right. this could take awhile, especially as it gets richer and richer people around here. disturb them. I worked across the street then, came back out later. riot and make noise. reenactment is not a cutie.