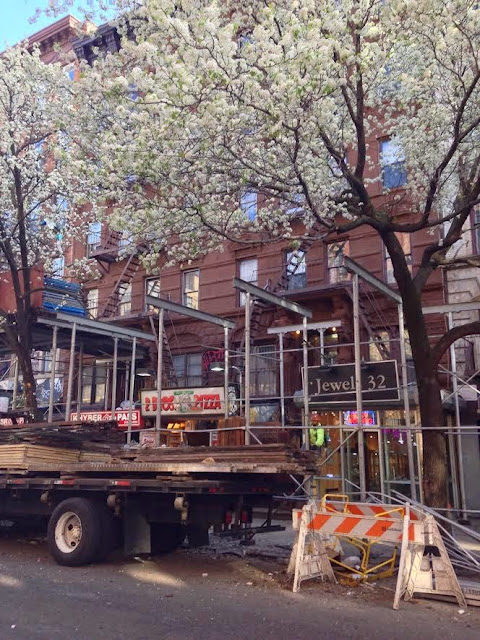 What a scene late yesterday afternoon on St. Mark's Place between Second Avenue and Third Avenue … where workers quickly removed the 6-plus-year-old sidewalk bridge from the south side of the street.

According to the DOB, the city issued the permit for the sidewalk bridge in February 2008. As far as anyone can recall, no work had ever been done on the buildings at 32 or 34 St. Mark's Place. 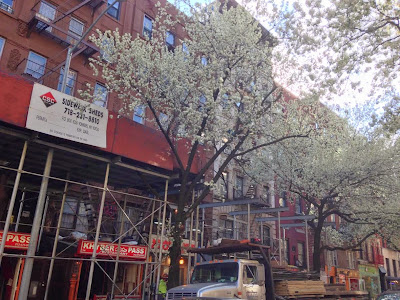 Among other things, the removal of the sidewalk bridge gives "The Doorshitter" of St. Mark's Place less cover … if he ever decided to return…

Oh, and THAT'S what the front of 2 Bros. looks like…

Happy 5th Birthday to the sidewalk shed of St. Mark's Place!
Posted by Grieve at 5:05 AM

Take your lack of scaffolding back to Ohio!

You mean the giant bile rack on St. Marks Place is gone? Oh no, that was the only place on the block to lock up a bike while getting a felafel at Mamouns or hanging oily with Zoltar. Without scaffolding we would barely have anywhere to lock our bikes in this "bike friendly" city. And that includes CitiBike racks which are either full or broken. I'm going to miss that scaffolding, but I bet the people who live there definitely will not.

The people who lived under that scaffolding will miss it, but their digestive systems will not miss their diets of $1 slices. I will not miss trying to walk around them and their dogs and the piles of trash and the poles ...

I was over there yesterday and watched them take it down.

Ha! Fooled you! It's not down yet! It's now April 30th and you will see that half of that bridge is still there. All of the materials from the half they did remove are now piled up on top of the half that remains... like a disaster waiting to happen.