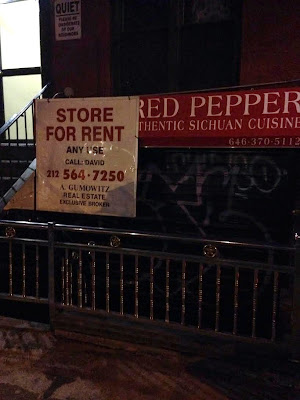 Over on East Sixth Street between First Avenue and Second Avenue, we have a taker for Red Pepper, which closed in March after six months. 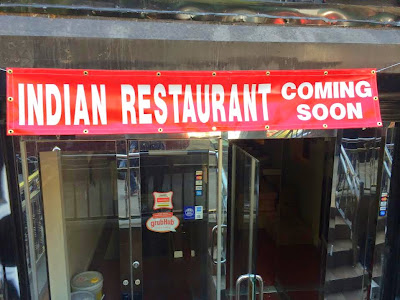 Morten reports that the new restaurant is called Pearl of India, with an opening expected as soon as next week.

The most recent additions to (the dwindling) Little India include The Eddy, the Italian-influenced restaurant from Brendan McHale, a former chef at Jack's Luxury Oyster Bar, and Figaro Villaggio, the Italian wine bar-restaurant in the former Banjara space.
Posted by Grieve at 5:01 AM

Little India? Does anyone call 6th street that?

Little India is in the east twenties.

East 6th was called Little India when i moved to Avenue C in the late '70s. back then, a lunch special at just about any of the places cost three bucks -- entree, rice, bread, appetizer, side dish of cabbage included.

It should be called Little Pakistan,as that's what the food is. Quite different than the Lex area.

In the beginning there was Shah Bagh, then Kismoth, next up was Romna, then Nishan, Anar Bagh and Shamoly, then Mitali, Bangladesh, Sonali and after that came all the rest. Back then everyone called it Little India, and the Indian places in Murray Hill were called Curry Hill as a takeoff on the neighborhoods name. But the restaurants fought with each other, cut prices, too many came in too fast, and the neighbors started fighting back. You still can't beat the lunch specials at Raj Mahal, but the better places went uptown, and to Queens. Mitali used to be so good, and their condiments and samosas were delish. Haveli took over later as the nicer, white tablecloth place with better food, haven't been back since they merged with Banjara. Now we have fast food Indian places like Indikitch on 23rd St, and the Kati roll places in Curry Hill and the West Village around MacDougal St. Masla Times on Bleecker is pretty good, as you can tell by the crowds of Indian NYU students who go there. But there was nothing like the experience of the original Little India, with long lines down the block and nice hot samosas waiting for you inside....