Contrada offers a sneak preview in the former Calliope 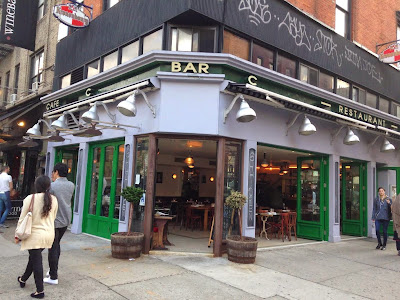 As we first pointed out last week, Calliope, the nearly two-year-old French bistro at 84 E. Fourth St. and Second Avenue, has closed … with the ownership promising a quick reboot of the space with a new restaurant called Contrada. (The owners apparently won't need to change the C on the marquee.)

Sure enough, as these reader-submitted photos show, Contrada was open for a sneak preview of sorts this past weekend… apparently they don't have a new liquor license yet. The chalkboard below in the photo is cut off … it reads "They won't let us serve booze yet … but the food is INTOXICATING." 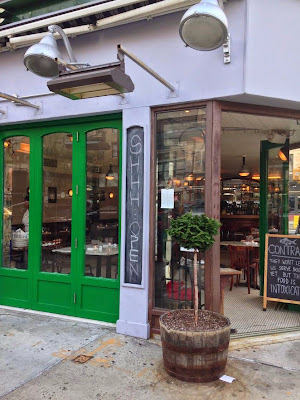 Here is a look at the menu … Contrada is serving food and wine "inspired by the Mediterranean." 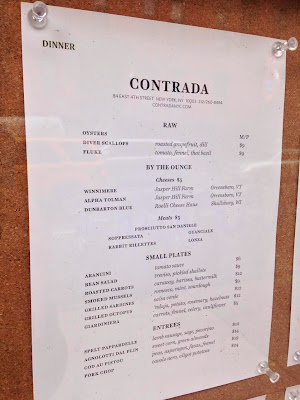 Here's the Contrada website with menus and hours. The Contrada Facebook page has some photos of the various dishes and interior.

As for Calliope, Grub Street reported back in January that chefs Ginevra Iverson and Eric Korsh split with the restaurant's financial partner, Eric Anderson.
Posted by Grieve at 4:50 AM

The normal for restaurants is apparently a 2 year cycle then a quick "theme" change to enter the next 2 year cycle until the lease is finally up or the money runs out. The are many reasons a restaurant fails, poor management which in turn means poorly trained staff, lack of marketing and appeal to the target customer, etc... However I wonder how a change of name, some new paint and decorations and adding a word like "bistro" will make a difference when the same characters are at work. I am not speaking about this place in particular but the trend we are seeing with all these damn "restauranteurs" messing about.