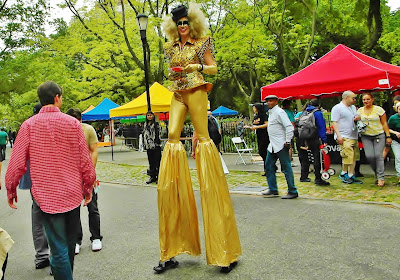 [A scene from the 2013 Dance Parade via Bobby Williams]

Hey, it's time for the annual Dance Parade tomorrow. Here's part of the news release:

Over 150 dance groups will showcase 75 dance styles and cultures down Broadway in a multi-cultural, rhythm-infused, magical display of movement, art and color. The parade unfolds as a vibrant procession of pageantry and movement embodying the cultural richness that New York reflects as a global dance city. Ancient dance styles from Africa, South America, Europe, the Middle East, the Caribbean and Far East Asia are performed side by side with modern styles like tap, swing, contemporary, urban and hip-hop.

The Parade begins at 1 pm at the intersection of East 21st Street and Broadway, moves south through Union Square and down University Place to East 8th Street, where each group dances before a Grandstand. Turning east on 8th Street Parade dancers salsa, swing and two-step their way across Saint Mark's Place and into Tompkins Square Park in the East Village for DanceFest.

The Festival, a four-hour program of free dance performances on four stages with lessons, experience dance booths and site-specific and social dancing throughout the Park.

Here's the overview of how dance officials will set up Tompkins Square Park for DanceFest... 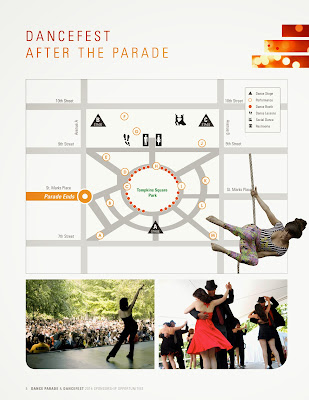 This year's Parade theme is the "Caddyshack"-esque "Be the Momentum." Here's the official Dance Parade website with more details.

Meanwhile, if you hate Mother Earth and park a CAR around here, then keep in mind there will be some posted No Parking signs up... or the city will tow your ass.
Posted by Grieve at 5:00 AM

This has become my favorite event of the year - hoping for sunny skies!

As close to the spirit of Wigstock as the park was likely ever to see, the ensemble groups of musicians and dancers ranging from Mexican Martachi Bands to Indian Sari Bellydancers, Flagger swirling tie dye scarves and gymnasts hanging from ropes...and that was before Barbara Tucker spinning an 80's Dance Off...freeform does not BEGIN to describe this!!

really happy, if there has to be a EV crowd, these where real people, NYC at its funnest :-)

The canned music was far too loud for the sound systems and the street. All I saw were citizens with fingers in their ears. Dopey lame Dj's yelling "give it up" and "Throw your hands in the air" while KISS crapnoise crackles the windows has nothing to do with dance. It didn't sound like a parade. It sounded like a cheap street fair for beer-drunk-in-the-sun hip-hoppers.

The after party in the park was the best party Tompkims Square has had in years. It was real old school, full of locals and dancers from all over the world, and best of all it was all free.