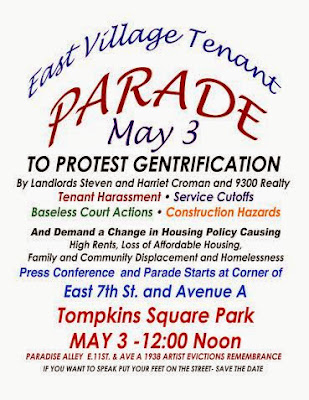 You are invited to attend a press conference at Tompkins Square Park and join an East Village Parade to resist gentrification in NYC communities. The loss of affordable regulated housing in the East Village and the displacement of tenants have been caused by landlords like Steven and Harriet Croman of 9300 Realty.

This landlord currently owns about 70 buildings in the East Village alone and hundreds throughout the city. He has been exploiting the vacancy decontrol laws for over 20 years using abusive tactics to force tenants out of rent-regulated apartments.

After the press conference the parade will go to Croman’s 9300 Realty buildings in the area to reach out to his tenants. Many of Croman’s tenants have the same problems and need to know how to protect their rights.

Paradise Alley
The parade will stop at Paradise Alley to dramatize the difficulty of being an artist in NYC today. On Avenue A and East 11th St. the building known as Paradise Alley was located before being replaced by the current building in 1987. While this little-known location is famous for the beat artists, musicians and writers from the 1950s and 1960s, there is a lesser-known association with East Village artists during the depression.

Rent Freeze
The goal of the Parade action is also to alert the East Village tenant community about the need to support the Rent Freeze. Mayor de Blasio is asking the RGB to impose a rent freeze this year to put a brake on rising rents. NYC tenants have to demand the same with feet on the street.

Here is an article about Croman from a May 2000 issue of The Village Voice.
Posted by Grieve at 5:20 AM

As much as I LOATHE the Cromans, how is a rent freeze going to make a difference to all the units that already deregulated and occupied by the trust fund kids?

Despite having furnished the newly deregulated tenants with the paperwork and prior rents so they could challenge the increased rents at 432 E 13th St, I don't think one of them did. They're fundamentally lazy

The goal should be to make deregulation more difficult by forcing the DHCR to audit all Croman's applications, not putting the onus on the remaining regulated tenants to fight the MCIs that he fraudulently submits. He submitted $225,000 for work that were denied by the DHCR but only after I went through his application with a fine toothed comb and proved that he wasn't eligible for ANY of the increases.

Are we also going to freeze the amount cost of heat, supt. contracts, repairs, maintenance, and other things that go into operating a building.

We asked Rosie Mendez for help many years ago regarding the Westbrook/Magnum aka Ben Shaoul takeover and she said-oh is that still a problem. We wanted an audit- nothing. She never even did one press conference.

Can you provide any pointers for challenging MCIs - how about a primer? I have a feeling we'll be facing one soon, lots of renovations in our building ... it would be nice to learn from your experience.

Just recently Rosie Mendez was asked to join her name on a letter addressed to Croman that was signed by State Senators and other city council persons on behalf of the Croman tenants and the Stop Croman Coalition, but Rosie Mendez refused to do so because she was afraid of a lawsuit!

Afraid of a lawsuit?

Rosie Mendez committed herself to speak at the Stop Croman Coalition Rally and then never showed up!

Who is she beholden to?
Certainly not the tenants.