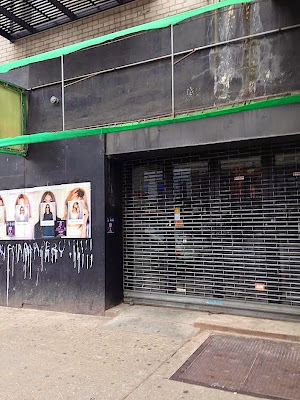 Not much has happened at the former Surprise! Surprise! space since the housewares store closed after 25 years in business on April 27.

Where are the "for lease" signs?

Well, perhaps there's already a new tenant lined up. An EVG reader passes along the following tip … a worker at the empty storefront on the northeast corner of Third Avenue and East 12th Street said that a Basics Plus will be moving in soon.

So, more housewares and and hardware-type items — much like what Surprise! Surprise! sold.

There is a Basics Plus just up the Avenue between East 17th Street and East 18th Street… no word if they are relocating or opening another location (there are three total now in the City).

Previously on EV Grieve:
Surprise! Surprise! will close at the end of April (42 comments)
Posted by Grieve at 5:20 AM

Email ThisBlogThis!Share to TwitterShare to FacebookShare to Pinterest
Labels: Basic Plus, Surprise! Surprise!

I am relieved it isn't going to be a bank branch or a giant froyo emporium!

There's also one on 13th & University.

And while checking to make sure I was correct about that, I looked on their website... there are actually EIGHT in the city.

In the name department, it's definitely a change for the more boring.

Basics Plus is an upscale, overpriced housewares store for Yunnies. RIP Surprise Surprise. You are sorely missed.

I love Basics Plus!

I shopped at Surprise Surprise for years but I felt I was always being watched and I hated having to check my bag all the time. It didn't seem like a hotspot for shoplifting. Who's going to shoplift mini blinds? But they were hyper security conscious.

There is no better name than surprise surprise! loved their logo and sign. Basics isn't so bad, but super bland.

I always assumed they wanted us to check our bags as many of the aisles were really narrow and had fragile things stacked up (lamps, dishes, glasses...)