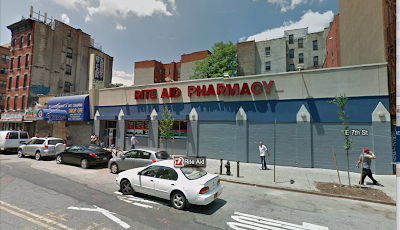 Just about a year ago news broke that 79-89 Avenue D — three single-level buildings — was for sale. Aside from two vacant storefronts, the address here between East Seventh Street and East Sixth Street includes the Rite Aid.

The space is now ready for new development. The Real Deal reported last evening that L&M Development Partners bought the parcel for $12.5 million. (The asking price had been $22.5 million.)

Plans call for a 12-story, mixed-use building here on the west side of Avenue D. And as The Real Deal notes, "The existing single-story structure contains 72,300 square feet of floor area, which can be expanded to 96,400 square feet with an inclusionary housing bonus."

Meanwhile, we have heard rumors that this Rite Aid will be closing in the coming weeks. However, there hasn't been any official announcement. This would make the second Rite Aid in the East Village to close to make way for new development.

Previously on EV Grieve:
Report: Space that houses Rite Aid on Avenue D hits market for $22.5 million
Posted by Grieve at 6:00 AM

Another victim of gentrification. Maybe they should do a Kickstarter: SAVE RITE AID!

Who would pay top dollar for a brand new building, only to be faced with the projects. It will probably cost a million dollars for a one bedroom? Only in NY kids...

Rite Aid is moving short term to the retail space at Arabella once the construction is complete it will be returning to the ground floor of the new Building. I believe the building will be rental like Arabella and Adele (Alphabet Plaza)offering twenty percent affordable housing. The current condition of Ave D is improving ate least on the West Side.