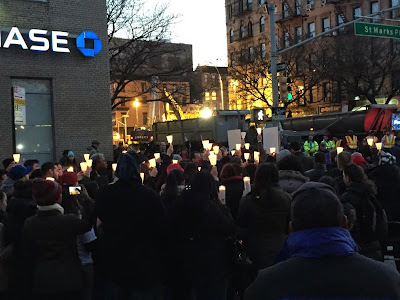 Friends and family members turned out this evening at St. Mark's Place and Second Avenue for a candlelight vigil in honor of 23-year-old Nicholas Figueroa, the first victim identified from last Thursday's gas explosion… 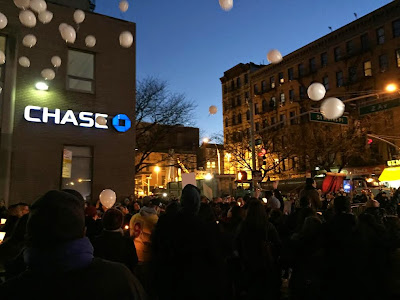 From ABC 7's Jim Dolan on the scene… (Updated: Here is ABC's (report.)

Silent prayer at the vigil for Nicholas Figueroa pic.twitter.com/iutT5d9sFD

Facing tragedy in the neighborhood is difficult.
Nicholas Figueroa's brother and cousin brought it that much closer to home. I feel for them. They shared their loss and I am Thankful to them for it.
Being there tonight, white balloons and candles, listening to Neal Thank everyone for being there, talking about how Nicholas was ok and was smiling when he last saw him,after being recovered from the site.
What an gut wrenching feeling, watching this family suffering at such a terrible time.
I wish them strength.
Nicholas Figueroa was, and always will be loved and remembered.
Those that loved Nicholas will be guided and protected by him.

I wish I'd been there. I can't stop thinking about this kid and his infectious smile. I love that he's a NYC kind, works in Chelsea and came to "the village" for a date. So cool. RIP

Grieve, might you entertain taking down the photo with the balloons rising? it just encourages more of the same. realize we are all terribly upset but balloon releases are just horribly destructive. best, jg

I'm a little perturbed by how Moises Lucon has been basically forgotten... because he wasn't "tall, had an infectious smile, or was up & coming"
The media has literally described him as just a "busboy" and I'm sure his family is just as distraught and any celebration of life & remembrance should have been for both. His brother & other family lives here, were they asked?
Was Lucon's family even brought from Guatemala to deal with this or do they have to wait until their son is returned to them
:(

His body hasn't been officially identified yet, according to the Times and WABC 7. On Sunday, the medical examiner's office said it will take a week or so to do DNA testing.

An East Village couple, who did not know him, started a GoFundMe campaign to help his family pay for expenses. I'll share that with you. I plan on posting the information later.

Yes I know that his body hasn't been ID'd yet, but lets get real who else can it be?? I think waiting for an "official" ID can be more torturous for the family
Luckily this didn't happen in the middle of the night where four buildings would have been filled

I searched GoFundMe to donate specifically for Moises' family and there isn't one yet [if you know it please share it]...
what I did find was many people attaching Lucon's name to their GFM pages to raise money for themselves and the disparity in how much is raised is interesting.

Renters Insurance is relatively inexpensive; as little as $250 a year can help get someone back on their feet.. people can spend way more than that on cigs, booze and dinners

Thank you @ShutupHooker for bringing Moises Lucon up. RIP. My respect for Nicholas but I would also like us to remember Moises Lucon as well. He came to the US for a better opportunity and died working an honest life. God Bless him. Please post that GoFundMe link so I can donate. Yes he may have been a "busboy" but so many of us have had humble jobs in college or throughout life just to make ends meet. RIP Moises and Nicholas, two young men who were at the wrong place at the wrong time.

I will never understand commemorating loss of life by releasing balloons into the sky. Why is littering and potentially choking a sea mammal/bird to death an acceptable way to observe this kind of tragic death of a human?

….if you are so concerned about the remembrance of Moises LOCON why not start by spelling his name correctly !

Thanks Mat for the Dumbass comment of the day... seeing as almost all newspapers have it spelled as Lucon.
But thanks for COMPLETELY missing the point.
..and yes its Mat with one T