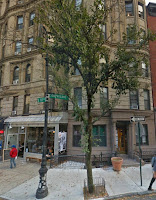 Last summer, police arrested Brooklyn resident Robert Pfeiffer as he stood outside Third Rail Coffee on East 10th Street near Stuyvesant Street admiring a piece of street art that may have been a Banksy.

Cops reportedly thought Pfeiffer was responsible for the smiley face and made the arrest.

Now, as the Daily News reports, he is suing the city and six police officers for wrongful arrest.

Ilissa Brownstein, Pfieffer's lawyer, said her client is a trained artist “who is interested in many forms of art including street art,” and he’d recognized the smiley face on the left side of the storefront as an iconic Banksy.

Pfieffer, 33, is a self-employed packing engineer for the advertising world who got his bachelor degree from the School for Color and Design in Munich.

“He said 'If I just did this, it would smudge, but it doesn't,'” she said. The officers arrested him anyway, keeping him in custody overnight. After two trips back to court, prosecutors dropped the charges in October.

According to the suit, Pfeiffer says he lost seven days of work at $45 an hour and has to take Ambien and Trazodone to sleep. He's suing for unspecified damages, per the Post.

A spokesperson told reporters that the city is reviewing the case.

Image via Google Streetview
Posted by Grieve at 12:44 PM

it takes 6 NYPD cops to arrest one alleged painter. It is apparent the cops have nothing to do and are overstaffed. You see them staffing overtime tables in the subways harassing patrons. You see them by the dozen inside public areas like the Citibank Bldg at 51st street. Hanging around, lurking, waiting to assault someone who can't fight back. Or some money to steal via civil forfeiture. the only time they are of any use is when the mayor shuts down the city such as during a fake storm event and needs to enforce martial law.

nygrump you earned you name with that posting

Next time you find yourself assaulted, robbed, etc. please don't call the cops for help as they are all, according to you, corrupt, lazy, etc. Never mind that they are trained to risk their lives for the likes of you. What are you, some old '60s hippie?

Your generalizations on this blog are downright stupid at times. I guess you just want attention or some such shit.

nygrump is correct, except that he forgot about all the time waster cops hanging out in McDonalds, Dunkin' Donuts, etc.
Will Rogers' statement that "It's a good thing we don't get all the government we pay for" applies in spades to the NYC cops.

Could the cops hanging out at McDonalds, etc... be on a break or lunch? Even cops get to eat like the rest of us. My dad was a cop (retired) and I would always tease him that if I needed a cop going to the nearest donut shop would be the best way.

The point here is that the arresting cops REFUSED to use a little common sense:

What is fucked up is that when the matter is settled out of court with a cash payment, it will be TAX PAYER dollars.

If that money came from the paychecks of the offending cops who gratuitously arrested this guy, KNOWING FULL WELL that it would be dropped by the DA's office, it's a lot LESS LIKELY that these sorts of arrests would take place....

Trained to risk their lives? Trained maybe, to risk their lives hardly. I say the training comes more in the form of lying, cheating, intimidation, extortion. That is today's New York City police dept and the 9th precinct. Unfortunate as it is it is in fact the truth and what my experience and I believe the experience of many other New Yorkers today.

My question is how can we change that? How can we start charging the police with perjury for making statements in court "not to my recollection." without checking or referencing the police report to indicate the facts of an incident.

That's the kind of BS they're taught today how to place the innocent person behind bars because that's what gets the city the prosecutor's office and the courts the $ they thrive on. The entire system today is an atrocity and a form of complete and utter bullshit.

These assholes aren't putting their lives on the line for you they're trying to wipe you out.
I wonder when those who are after them finally come for them who are they then going to turn to? After all donuts will only get one so far

Right on to chris flash's point that the cops should be personally liable and have to pay out of their own pockets.

March 24, 2015 at 5:24 PM -yes I want attention. Affirmation. Anonymous postings on a State-monitored platform really does it for me. You should meet me in person. I make people cry without even trying. All it takes is stating some facts. Its funny you can never criticize the police without someone replying like you "...next time you find yourself assaulted..". In other words, you believe in tyranny and express such, and because I don't, I shouldn't expect services for my tax dollars. we usually take care of things on our own on 6th street.

My dad was a cop, sure there are bad apples, and over zealous rookies but cops must graduate from a training academy and learn the limits of their available options and actions. Cops have to deal with the worst of our society every day. My father told me stories about all the domestic violence cases which happened in any given night. Handling drunks and drug addicts is not fun, while we can all hurry past them on the street. Again I'm not saying all cops are saints but it's a shit job and as with firemen it attracts men and women who care about strangers sometimes enough to risk their own lives.

This is a joke, right?

Next time you find yourself assaulted, robbed, etc. please don't call the cops for help

Why not? It's their fucking job, no? Or do they get paid to protect and serve only those they choose to?

The cop haters seem to have no response to the poster whose dad was a cop...interesting.

I agree with him/her though in that there are both good and bad cops....why lump them all together?

@6:45 I think the poster was being sarcastic at the person who wrote "they take care of their own" on his street and who thinks cops are all lazy and corrupt etc.