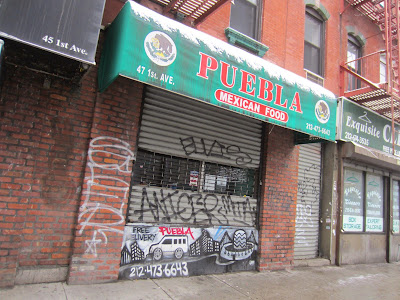 As you know, Puebla Mexican Food is shutting down at 47 First Ave. between East Second Street and East Third Street. There were several closing dates… last we heard, owner Irma Marin would keep the 25-year-old quick-serve restaurant open through Monday.

Not sure what happened to those plans, but Puebla has officially closed… back on Wednesday, per one EVG reader. The storefront has mostly been cleaned out.

A rent hike is apparently to blame for this closure. 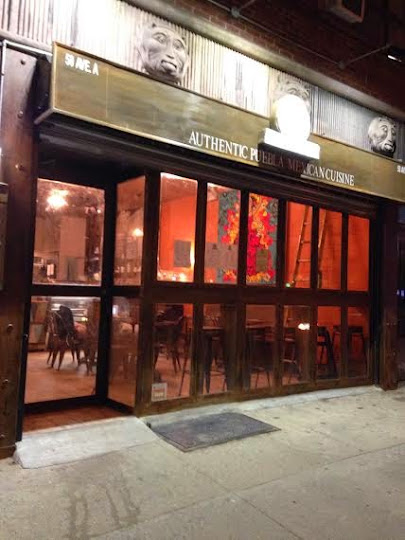 Here are their menus… breakfast (served until 2 p.m.)… 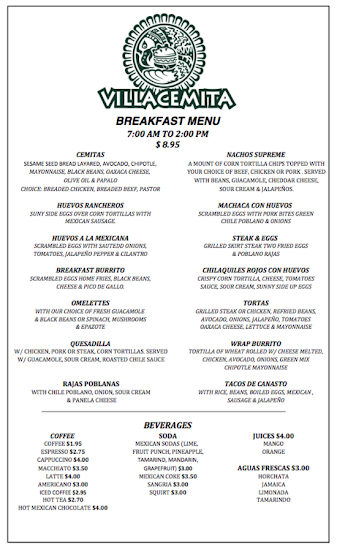 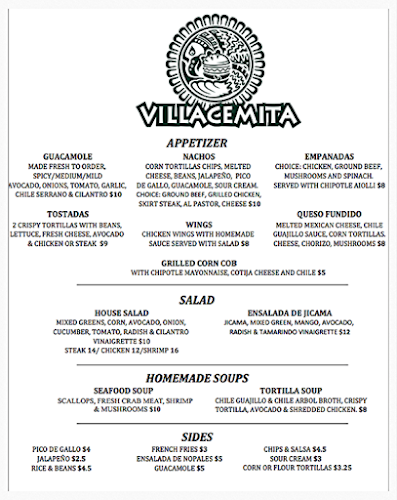 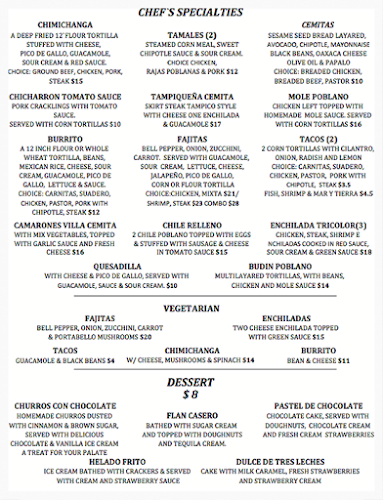 They have not yet posted their beer-wine menu.

After today, Villacemita's hours will be 7 a.m. to midnight every day.

Puebla Mexican Food is closing after 25 years on 1st Avenue (29 comments)
Posted by Grieve at 11:31 AM

Truly sad about Puebla. They had the best mole' in NYC.

Villacemita can hardly replace it....and they are looking pretty pricy in comparison.

The grapevine says that Puebla Mexican is looking at a space in Essex Market. Hope that happens and that their patrons follow. The market is the last bastion of mom and pop businesses, and they need support (ie- people need to stop complaining about all the changes in the neighborhood and shop there). Just about anything you can find in Whole Foods or Union Market can be bought at Essex Market. Go see.

$8.95 is not a bad brunch price but I'm afraid I won't be eating there. I just received a rent renewal for my studio from $2496/month to $3771.32. Having lived here for forty years I'm fairly certain I'll be shutting down my own business and moving on. I'm not going to be held hostage from lease to lease while the money grubbing leaches steal away my future and leave me penniless for retirement. It's time to set up shop in another city.

Part of the reason of such high rents is that NYC *IS* very expensive to live in - property taxes, insurance, water, heating - they all are costs that have gone up, up, UP! And that is not even talking about the mortgage.

12 bux for a gringo burrito, huh. Well EXCUUUUUUUUUUSE ME.

I tried Villacemita last night for dinner and it was excellent. Staff was friendly, atmosphere cozy. I highly recommend the mole.

Thanks Goggla! I plan to check it out...