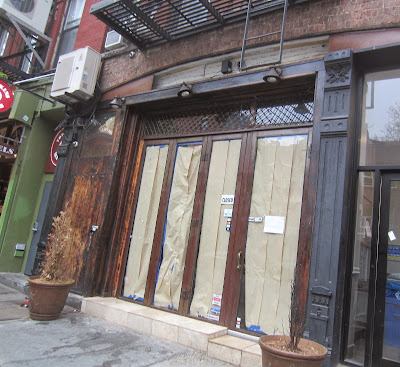 Ethos Meze East Village closed for renovations at 167 Avenue A back in late March... and there hasn't been much activity in the space here between East 10th Street and East 11th Street ... except for someone removing the Ethos Meze sign.

The restaurant is owned by the same folks who run the Moonstruck Diner chainlet in the city. Now comes word via the rumor mill that the owners will convert the space into another Moonstruck, similar to the one on Second Avenue and East Fifth Street.

The space remains on the market, however.
Posted by Grieve at 4:40 AM

I hope the food in this one is better than the 2nd Avenue location. But who am I kidding, I'd eat ground glass on slices of sheetrock if that's what they served, so thankful am I that it's not going to be another bar.

I will take a diner over another bar any day. I wish more restaurants and shops could take over the bar spaces on upper Avenue A.

When I go to Moonstruck, I always order the same thing: Bacon and Eggs with Home Fries. Couldn't f*ck that up, no matter how hard you'd try.

Anything not a bar or chain is welcome by me!

That space hasn't had a successful tenant since No-Tell Motel 20 years ago... WTF are they doing wrong?

Okay, but do people really eat at diners anymore? I don't see Moonstruck very full most of the time. Other than a good stop when nursing a hangover, the food is a bit overpriced and mediocre. And not the healthiest.

I've noticed a big drop in diners and chinese takeout in the last 10 years.

That said, it's better than a bank.

just that someone would ask the question speaks volumes about change in the neighborhood. And yes... hell yes.

I had an egg white omelete with tomatoes and avocado and a side of steamed broccoli last week for dinner at Moonstruck on 2nd Avenue. So to answer your question — yes, you can eat healthy there.

I was the one that asked the original question. if we're choosing sides, I'm on yours.

The question was do people eat at diners the way they used to? Having lived in this hood for 20 years, I would vote no. (btw, I fukin love a diner). And yeah, I'm aware you can find an egg white and broccoli, but for that quality of basic comfort food, I can make it at home and save $20 after drink, tip, etc. And show me what hours Moonstruck has an impressive amount of people inside.

The gist of my comment was just to say if I was investing in a restaurant in the current east village (or manhattan for that matter) I wouldn't invest in a diner. Peace.

Do people still eat a diners ?!

I would say the loss of the diner is one of the greatest tragedies In the new new york.

I call them the great equalizer. Where a CEO can sit next to an artist next to a construction worker next to a homeless person.

I love great restaraunts but nothing makes me happier than having breakfast or lunch at a diner.

To me they ARE new york.

Been to several of the Moonstrucks around the city. Always found the food a bit overpriced and not particularly good. The only consistent trait shared by all of them is that at least one piece of silverware or drinking glass was absolutely filthy.

Good to have another diner in the hood but not over the moon about Moonstruck.

It's strange, I live closer to Odessa and when it comes to dining at a diner, I prefer Odessa. That said, for as long as I've been living here (about two decades now), getting pancakes (and a few other things like bagels and muffins) delivered to me from places that aren't Odessa on a really really hungover morning has been somewhat of a ritual. Before it closed, the order was blueberry pancakes from Teresa's. Those were amazing--pretty sure they just stuffed a can of blueberry pie filling in them. Since then, the hangover carb-loading has come from Moonstruck in the form of banana pancakes, a bagel, and a low-fat yogurt blueberry muffin. The pancakes are a little better than mediocre but good when drenched in syrup, but the muffins are surprisingly out of this world. Not sure if they bake them or get them delivered, but they're worth every penny. I have a feeling I'll visit this Moonstruck as often as the one on 5th (that would be never), but I'll definitely a delivery customer.

Science is proving that what we thought is healthy ten years ago is not necessarily healthy.

After years of pushing the fat is bad mantra, Americans bought into it and now have an epidemic of obesity and diabetes. Now we find out that fat is an absolutely essential part of your diet. When you take away the egg yolk and eat only the white, you're missing out on the good fatty acids in the yolk. Some butter or olive oil on the broccoli would make it taste better and help fill you up in a good way.

There are good and bad fats though. Coldwater fish oil = very good. Trans fats = BAD. There are new studies that suggest we should absolutely be avoiding cooking with processed oils like canola and vegetable and opt instead for cold pressed olive oil, coconut oil, and butter, ghee, lard, or chicken fat for cooking at higher temps. We get our lard fresh from the East Village Market. You can get rendered leaf lard from the Flying Pigs Farm at the Union Square Farmer's Market.

And salt. That is a critically necessary part of your diet too. Avoiding most processed foods should eliminate any worry about getting too much of it. Too little is bad, esp for older people.

To maintain a healthy weight, the thing to avoid is sugar and processed food.

I wish there was a diner on Bowery below Houston somewhere. And I don't mean like Bowery Diner. wow, was that ever a con job - thanks CB2. not! I mean a real diner.

And it's really not about the food. That's too dependent on the individual chef/cook. I mean it's about community. At diners whether day or night one can usually sit with a couple of friends for about as long as you like, hours, just shooting the shit. If it's not crowded, of course, one can wear off a buzz at 2am, or nurse a hangover at noon.

Only tourists order the entrees that disappoint. Diners are for eggs over, grilled chez, or the classic burger-n-fries -- that simple kinda stuff. I'm jealous of my dad back in NC, cuz he can go to his regular diner and guarantee he'll find people he knows there without prearranging anything. They're just there, hanging out. I used to be able to go to Dojos and find folks I knew, sorta an asian-ish diner.

It's just a shame that diners don't fit the current profit-plan (rents and real estate taxes) for this area anymore. very sad.

Well, bowboy, we still have Cup & Saucer (for now) on Canal NEAR the Bowery...but I know precisely what you mean.