Your chance to (legally) ride a Citi Bike for free tomorrow 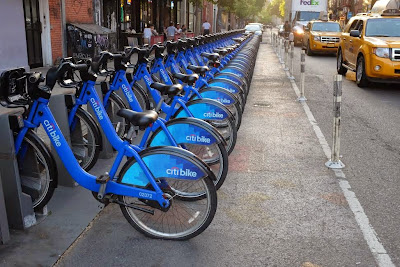 Here are the details via the EVG inbox...

On Thursday May 14, Switzerland Tourism invites New Yorkers to experience the fun and freedom of bicycling in honor of Bike-to-Work Week. From 12:01 am to 11:59 pm, Citi Bike day-passes will be available for free at any Citi Bike station kiosk. This is the first time a partner has provided a free day of Citi Bike passes.

What makes Switzerland the perfect partner for Citi Bike? Easy: Switzerland offers 5,600 miles of cycling routes and 2,800 miles of biking trails as part of a program called SwitzerlandMobility. Switzerland is the place to go for anyone who wants to swap NYC's high-rise buildings for stunning mountain scenery and city bike lanes for well-marked cycling and mountain bike routes which crisscross a land full of surprises.

To ride New York City free on May 14 from 12:00 AM to 11:59 PM, riders just need to swipe a credit card and select the 24-Hour Access Pass option. No promo code is needed. A $101 security hold may be placed on the card. Standard overtime fees apply to trips that last longer than 30 minutes.

"Public Transportation" that requires a credit card and security deposit.

$101 security hold on a credit card? Ohhh, I get it. So really, only the well-off can ride for free (because how many poor people who might enjoy a free bike ride; a) has a credit card, b) can afford the $101 risk. Bogus!

Does the ad tell you how your ride will be tracked by GPS and recorded by their marketing Dept? Sure I got nothing to hide, but do they if they have to cover up this fact?

This isnt a bike giveaway promotion, it is a pass to try citibike. 100USD is a small deposit relative to the cost of the bikes, I imagine.

I hope they do use the user data to improve their service, although they should make it very explicit that they do collect this data.

Even though I'm pissed off at Citibike for doing this because it's hard enough to get a bike during peak times as it is, I have to address the "Citibike is for the rich" comment.

Residents of NYCHA or LES Credit Union get annual memberships for $60, that's about half of what a monthly metrocard costs. They also DO NOT need to provide a credit card or debit card.

Break in that stolen credit card for a free bike.

I feel like, Citibike could hand out thousand-dollar bills just for doing a free trial ride, and people would figure out a way to complain. Not a citibike user by the way. I hate citibike just as much as I hate all of you.

hahahaha -- now this is the nyc I love and miss....
"I hate citibike just as much as I hate all of you."
That really made my day. Well, it made me feel better about myself, anyway. Poor schlub.

That's great. Citibikes are a great way to get around, especially for the short jaunts when you're already out. The more people that ride bikes, the better!

How long do they "hold" your money for?

I have my own "city bike". Unlike a Citibike, this city bike weighs less than 50 lbs. (Heck, it probably weighs less than 25--I can sling the whole thing up on my shoulder and run up or down some stairs if I need to.) Unlike a Citibike mine was not engineered for slowness. The opposite actually. It has more than three gears, 4x to be exact. I've heard of some people's city bikes having, like, 18 or 21 gears. Jesus! I can dock the city bike to any open bike rack or even a street sign post--any secure, non-proprietary immovable object really! Point being--there is always a place to dock this thing. Worst case scenario I've had to go a block away from my destination to find one. Another cool feature is that I can go on unlimited rides. No time limits whatsoever. I can even take this thing with me on trips and ride it on vacation. WTF.

The downside of this kind of city bike is I have to lube the chain myself, pump the tires and fix the occasional flat. But I don't care, I still love city bike.

On my lunch hour today I saw one Citibiker riding on a midtown sidewalk, another riding against traffic crosstown, two more salmoning after picking up bikes at the NYT bldg on 41St, and later almost got taken out by some asshat riding UP 5th Avenue on my ride home (if you're out there, that was me who screamed FUCKING MORON! at you.).

Yeah, things are just SO much better now that the city is providing nearly free bikes for the clueless. Guess I'm just a hater, bro...

I really wish NYC would get serious about 2 things:

1. Making bike riders actually observe rules (like stay off the sidewalks if you're an adult; don't go the wrong way, etc.), and

2) Build a hell of a lot of genuinely affordable housing. Genuinely build it, not just theorize about building it.

Does anyone know exactly how much the Swiss contributed to make this happen?

I do hope the Swiss underwrite repairing the soccer fields. http://www.boweryboogie.com/2015/05/rumor-defective-stanton-street-soccer-field-sidelines-steve-nashs-showdown-in-chinatown-for-now/

This morning I was walking to work when I realized I was going to be late. At 24th Street I picked up a Citibike and rode, the wrong way on 24th, to Madison Avenue. There was no traffic coming, but that doesn't matter -- I was a Citibike scofflaw! Citibikes suck! Oh, and I was on time for work.