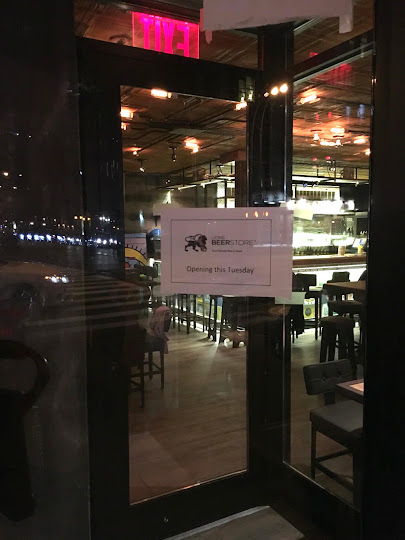 The sign on the door here at 104 Second Ave. at East Sixth Street announces that the Lion Beerstore will be opening today.

Per their Facebook page, "Lions Beerstore is a beautiful bar, a restaurant, beer consultancy, and retail store under one roof."

A father-son team, who hail from Greece, are behind the operation, and they will reportedly offer more than 300 types of beer in the retail section as well as a food menu offering American and European pub food at the bar.

According to their CB3 application (PDF!), the store hours are 11 a.m. to 1 a.m. Sunday through Thursday; until 2 a.m. on Friday and Saturday.

The space was previously home to Spice, which closed in June, consolidating its operations with a move to First Avenue between East Fourth Street and East Fifth Street.

Despite the Opening Tuesday signage, the Lion folks needed one more day to have the place ready for company… EVG contributor Derek Berg says that the store will be open tomorrow… 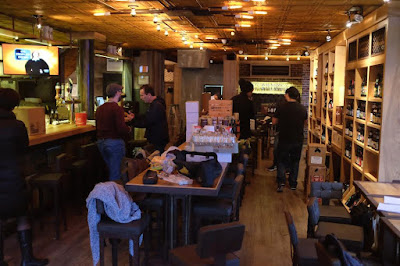 Previously on EV Grieve:
A new mural and beer store on 2nd Avenue and East 6th Street
Posted by Grieve at 4:15 AM

yet another productive business selling recreational drugs...it will be great to go inside this beautiful space- just one of hundreds of beautiful spaces in the east village where one can comfortably take their recreational drugs, as approved by he State. You can know you are doing your part to help the national security state by buying those taxed recreational drugs! You can do your part to make sure ISIL and Al-quaeda get those US military supplies while getting fucked up! FUCK THE WORLD WHILE GETTING FUCKED UP! PAY THOSE BOOZE TAXES BITCHES!

What the heck is a 'beer consultancy'??? Is that like telling the bro-hipsters that they should have a PBR?

Why do you allow whiny posts but delete posts that praise the owners for opening this new store? They came all the way from Greece to make it here. That's what the East Village is all about.

I do not know what you are talking about. I didn't delete any comments here.

EVGrieve, It wasn't deleted, it was never posted. It wasn't offensive. It said the same thing about opening a new business, etc.

"Beer consultancy"? What's to know? You're only renting the shit anyway.

Will give it a try... Welcome quiet places with good quality beer and not 13 step doucheries

Hey at least you didn't misuse the word "neoconservative" this time, or blow your dog whistle.

And a "beer consultant" is the same as a "wine consultant," but for beer. They are a cicerone (sommelier for beer) without the bona fides.

i'm just impressed that for once a place actually opened within a week or so of saying they'd open. looking at you, black seed/dan & john/east village cheese store/davey's ice cream/fuku/everyone else who gives a target date and misses it by months

Of all the things this neighborhood needs under one roof. Really.

Listen, no one is begrudging these people for trying to make a buck. They're operating a business with a market: people who drink alcohol. And people drink lots of alcohol, especially in this zipcode with more bars than any other place in America. Of course, purportedly people also report being unhappier than ever, this despite all the alleged advances in personal freedom and being on the cutting edge of the future and the right side of history, etc., etc. Coincidence, I'm sure.

Also, as someone else pointed out, they're operating a "beer consultancy," which means they're also selling you the snob factor. Again, it's a business with a market. Granted, most of the people who walk through their doors won't really care what the difference is between this or that kind of ale and couldn't care less about this beer's 'bouquet' or that beer's 'after notes' but they'll feel superior paying for it all the same.

Beer's a crude poison, craft or not, but I'm sure they can find you something that'll pair nicely with your artisanal pudding.

Do they have bathrooms?

I'm happy a small local business is opening, instead of yet another chain store.

I would have loved a Greek restaurant - don't seem to be any in the nabe. There was one for a short time across 2nd Ave from this place, but very pricey and didn't last long. That was sad too, a retired Greek fisherman living out his lifetime dream to have a fish restaurant.

Oh, well...more beer, more alchohol...that's all that will support these rents today.

Goes along with the pretention that has arrived in this part of the EV. On 5th St (between 2nd and 3rd), the Coffee Project is serving up the "deconstructed latte" as per TimeOut:

The titular "projects" are progressive, playful drink creations that challenge guests to jazz up their morning Joe. The inaugural Project 1 is a latte broken down into an ordered, three-glass flight: espresso, milk (pasteurized at a lower temperature to imitate the taste of the raw stuff) and then a finished, fully-composed latte. Drinkers are able to single out individual flavors as they linger on the palate, before reconciling them in the completed product.

Maybe a showdown between the barrista and the beer somelier in the middle of 2nd Ave???

Must every new establishment have a mancave theme? Do these business owners not learn from all of the other niche failures?

If you want a Greek restaurant there's a relatively new one on 1st Ave.between 13th and 14th St. called Taverna, and it has been packed every night since they day they opened. But I doubt they offer an Ouzo consultantcy so you're on your own.

Right, a small business, like Proletariat is a "small" "local" business, so are Mother of Pearl, Ballaró, The Immigrant, Booker and Dax, Grape and Grain...

What 11:44 AM meant to say is that (s)he is happy a small local business shilling more alcohol catering to very few and select is opening.

Giovanni - Thank you for reminding me of Taverna. You're right -it's packed, guess that's why I've never managed to go there.

They used to open for breakfast and there were always people sitting, reading a paper, enjoying a slow morning. But those people stopped coming and they are opening later and later, now 11 AM. They had groceries and take out sandwiches when they first opened. But all that has changed. They are not happy with the changes, but it's necessary to keep open. And we're not happy to lose the neighborliness of it, but she's right - the neighborhood has changed and there are not enough of the old-timers to support them.

I bet you're a ton of fun to hang out with.

Seriously? Pylos on 7th has some of the best greek food in the city.

I walked by here, and their drafts are over $10! It's bad enough that everywhere you go, mixed drinks are all $10-15 now, but I'm not paying that for a glass of beer, I don't care how delicious it is.