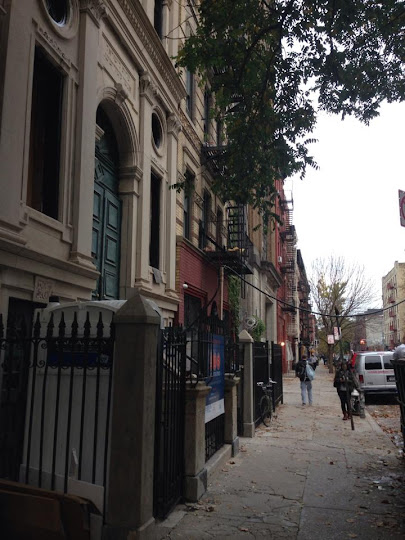 Sales on the three luxe condos at the former Congregation Mezritch Synagogue at 415 E. Sixth St. between Avenue A and First Avenue are underway, as Curbed noted yesterday.

There are just two renderings to gawk at for now in the building with the tagline "History reimagined … For modern living." 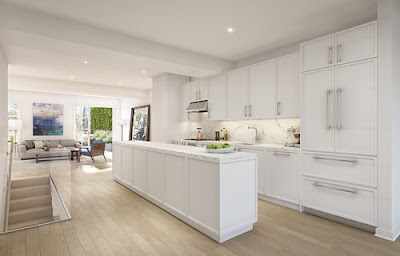 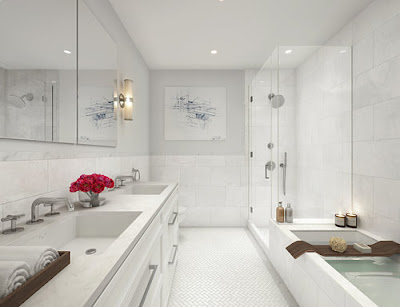 And here are some of the amenities via the official 415 site:

And what will that Herringbone pattern Cambric Persian White Classico honed marble tile floors cost you?

[C]onsidering the size of the apartments and the location, they're pricey: the second-floor two-bed is $2.95 million; the third-floor unit is $3.25 million; and that penthouse, which has two private terraces, is asking $4.4 million.

Not mentioned anywhere is the proximity to the all-new Dunkin' Donuts on First Avenue and East Sixth Street.

Sidewalk bridge comes down as condo conversion continues at former East 6th Street synagogue
Posted by Grieve at 4:26 AM

Occasionally I peruse the high end real-estate listings to see how the privilege people live. From what I've seen $4 million will get your a much better living space than this penthouse apartment. I'm in the design business and can tell you a lot of what these renderings depict are no longer considered "high end" especially the herring bone white marble as an example. If I had that kind of money I would buy a simple space and get a good architect to design it and not settle for this rubber stamp contractor job in these renderings.

Hmmm - how many languages can I say "That's hideous" in, I wonder?

When you fight for preservation, you get preservation. What you don't get is time, and land value, stopping.

Is that a Corinthian leather couch?

To Anonymous above, the sad truth is that no one who pays $4m for an apartment wants to keep the finishes they bought. The very first thing they do is rip it all out to put in whatever the hell it is they want. So it's all throwaway window dressing.