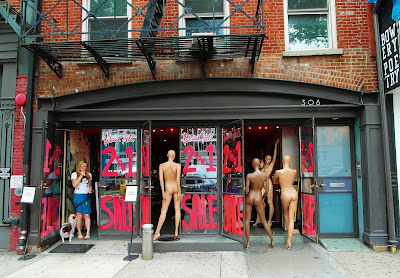 [Photo from August 2012 by Bobby Williams]

You may have seen the news earlier today that designer Patricia Field is calling it quits, with an announcement that she will close her retail space at 306 Bowery between Bleecker and East Houston in the Spring.

“I know that my clients are going to be sad, because they come in and tell me that there’s no store like this in the world,” the 74-year-old fashion icon told the Daily News. “But I’ve gotta watch out for my health and myself.”

The native New Yorker responsible for making Manolo Blahnik and Oscar de la Renta household names by strapping them onto Carrie Bradshaw on “Sex and the City” revealed that she is shuttering her 4,000-square-foot shop.

The fiery-haired Field opened her first store in the West Village in 1966 before moving to 10 E. Eighth St. in 1971, where she catered to fashionistas for 30 years.

And via Vanishing New York, here's a video from Nelson Sullivan in the mid-1980s showing the Field shop on Eighth Street...

That was my first reaction, but seriously; she has a right to retire, doesn't she?

And things just got that much less interesting around here...

That was my reaction too. My stuff from Pat Field's, and a visit there, made me feel and look glamorous and beautiful. Got my first padded bra there! The staff were amazing, and I loved the cat in the Bowery location.

I may be wrong, but this closing indicates she was heavily involved in the store. It wasn't just a brand. It may be like Amato Opera; when Tony couldn't find the right successor to carry on his name he just let it go.

Ugh, this makes me sad. Shopping there has always been a fun and unique experience. But I wish Patricia well.