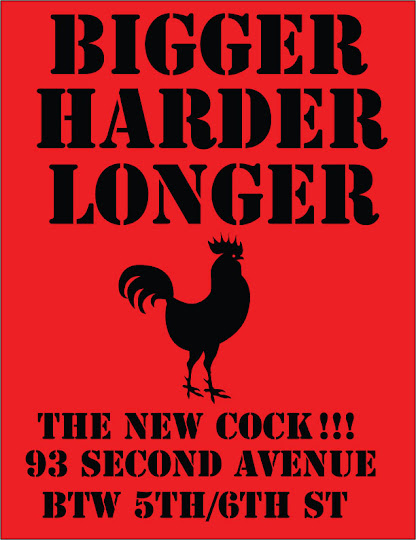 After a battle with residents and Community Board 3, it looks as if The Cock is still packing up and moving several blocks up Second Avenue to the former Lit Lounge space.

As an EVG reader noted, the bar has taken to social media with the announcements... noting a Thursday opening date...

You should tell everyone you know that we're moving on Thursday to 93 2nd Avenue. #nyc #gay #eastvillagenyc #homo

In August, the CB3 SLA committee voted against owner Allan Mannarelli's application to move the Cock from its current Second Avenue home to the Lit space between East Fifth Street and East Sixth Street.

The application was heard again before CB3 last month. According to the minutes (PDF) of that meeting:

Community Board #3 denied its application [in August] for a new full on-premise liquor license, in part, because 1) there was substantial opposition from area residents, citing the already overwhelming conditions on this block of Second Avenue from the existing thirteen (13) full on-premise liquor licenses, which include crowds of people on both sides of the street so big that residents have to walk in the sidewalk, drunken people, noise from people, noise emanating from the open facades of businesses, trash and vomit on the street, 2) there were resident complaints of noise and crowds from people in front of the existing business located at 93 Second Avenue and the sometimes impassable conditions from patrons at night in front of this storefront, which is situated behind a bus kiosk, making the available sidewalk significantly narrower for pedestrians, 3) the principal made misrepresentations about its business to Community Board #3 when it applied for its full on-premise liquor license at 29 Second Avenue, for The Cock when it was located at 198 Avenue A, and for Superdive, located at 200 Avenue A, 4) there is a substantial difference in residential character between the block of Second Avenue where its business is presently located, which is comprised of mixed low and medium rise commercial and residential buildings on one side of the street and commercial lots and buildings on the opposite side of the street, and 93 Second Avenue, between East 5th Street and East 6th Street, which is densely populated with five (5) and six (6) story residential tenement buildings ...

BE IT RESOLVED that Community Board #3 asks that the SLA not consider the alteration of the full on-premise liquor license, for 93 Art LLC, by majority principal Allan Manarelli for the premise located at 93 Second Avenue, between East 5th Street and East 6th Street, to wit decreasing its size by one (1) floor and reducing its certificate of occupancy to one hundred fifty-seven (157) people until this principle has appeared before Community Board #3 for the hearing of this application.

Keep in mind that the Community Board's decisions are only advisory. The State Liquor Authority has the final say in these matters.

Lit first closed at the end of July after 13 years. There was talk of a relocation to Brooklyn, but those plans never materialized.

In July, according to multiple published reports, police arrested a teacher and coach at Leman Manhattan Preparatory School for allegedly having sex with a 16-year-old girl inside the bathroom at Lit Lounge.

An EVG reader passed along this photo of the Cock sign now up at the old Lit space... 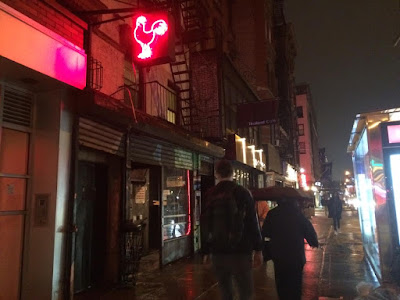 Reports: Prep school teacher arrested for having sex with 16-year-old girl in bathroom at Lit Lounge
Posted by Grieve at 11:16 AM

Loves me some Lit Cock.

@ 12:14 - take your homophobia elsewhere. Homosexuals can be just as juvenile and lowbrow as all those majorly moral superior squares out there. What? You think it's all just 'Queer Eye' 'Big Gay Home Decorating Network' don't you? Well, this is about, raw, unadulterated cock. Sometimes less is more. Except where cock is concerned ... obviously.

Size apparently matters when there is booze to sell.

Can they really call this a "gay bar" if no one is happy it's opening?

Isn't there a church on 2nd Avenue between 5th and 6th and isn't there one between 4th and 5th and maybe another one. Not supposed to be liquor licenses within 200 ft. of a church but it seems as if there are. The SLA has actually revoked licenses because of their own mistakees in granting full liqure licenses to businesses within 200 feet of a church.

This guy is just despicable.

1:39, you're a fool to make an assumption that I'm homophobic. I didn't even know it was a gay bar. So get off your high horse you silly goose.

Omg Xmas is early this year

Still prefer it to another sport's bar, it is highly unlikely the new Cock will have an open facade like every damn place selling alcohol here has.

It's about time we give the church regulations set forth by community businesses, not the other way around. Churches have way too much leeway.

I've lived in the neighborhood for 10 years: you know who the most obnoxious, loud, trashy, disrespectful people are? The newest ones who should have moved to Boston or Chicago or Jacksonville, FL. They're animals.

This wil be the saddest gay bar since Rawhide closed down in Chelsea.

It will be interesting to see how the Cock crowd intermingles with the Bros when they're all out drunk. I think we're gonna see lot's of homophobia. Or guys "mistakenly going in there...ore more bridal showers because "the gays are such fun"!

Favorite memory of old Cock space, walking by about 5 years ago --
Two very drunk blonde sorority girls peering into the Cock on teetering heels: "Giggle...it looks like such a dive! Should we go in? teehee!"
Bouncer at Karaoke Club next door: "Let me just say you're not the type those gents are looking for."
One of the girls "oooohhhhh.....cuz we're not black?"

Manarelli was not present at the CB3 meeting for this latest consideration. Apparently he has bought a controlling share of the Lit Lounge business and the license will continue as Lit Lounge.

He displays such total disrespect for his neighbors, this is going to be a long, hard fight. The issue is that he plans to expand to multiple floors in a residential building and the additional traffic and noise on a street filled with apartments, not a storage facility and the other commercial enterprises, as the previous location.

This is awesome. I love me some cock!

I think churches should have to move if they're within 200 feet of a bar.

The Lit Lounge always had people hanging out by the front door, blocking the sidewalks, bands blocking the bus stop while unloading audio equipment...and noisy at times.
In comparison, the sidewalk outside The Cock at its present location is always quiet, respectful of its neighbors, and generally a non-issue.

Let's hope that the new location will show the same civility and have the same respect for their new neighbors.

That sculpted topiary beard is disturbing. Please Photoshop some hair on the area under the chin to the neck. Thanks.

"I think churches should have to move if they're within 200 feet of a bar."

I don't think there is a church on this block. There is one between 4th and 5th, another between 4th and 3rd and another between 3rd and 2nd. I don't know the 2nd Avenue businesses all that well but I think that there are a number of full liquor licenses on these blocks which are probably illegal because of their proximity to the churches.

Why is everyone up in arms about the bar facing the church? It's a gay bar. Not an S & M club. This isn't the deep south for Christ's sake. That is what makes NYC unique: diversity! Get used to it.

The SLA is fucked up. The CB3 goes through all of these steps for their advisory opinion and the SLA completely ignores it almost every time. It's so fucking weird and pointless.

A full liquor license can't be within 200 feet of a school or a place of worship by SLA law. They can get a beer and wine license just not full liquor.

Went to the new Cock Bar a couple times last week. Nice improvement over the old location, however, it's lost it's dive-y edge. Also, drinks seemed a little pricier than I remember. However, it's still as trashy and fun as ever.