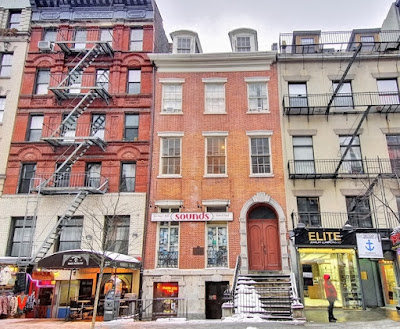 For months now we've been hearing that 20 St. Mark's Place was in the process of being sold.

And now details on the sale of the historic building between Second Avenue and Third Avenue are public. Real Estate Weekly noted last week that Klosed Properties is the new owner. There wasn't any mention of the price. According to public records, it appears that Klosed Properties paid about $5.6 million for the building, which includes a 2nd-floor co-op that also served as an art studio.

We don't know too much about this real-estate company. Among their newer properties in their vast portfolio: 837 Second Ave., which was home until last spring to the original, 90-year-old Palm Restaurant. As several news outlets reported, workers wiped away the Palm's iconic murals and magazine covers that lined the walls last August. Klosed principal Steven Kachanian told The Real Deal the following about the Palm space in August: "We're working with some high-end tenants looking to do some major work to the property."

So what does the sale mean for the lone tenant at No. 20 — the 40-year-plus old Grassroots Tavern? They are staying put. The bar's majority owner, Jim Stratton, also owned the building. According to a source with some background of the deal, the bar has a lease for the next five years... with an option after that for renewal. 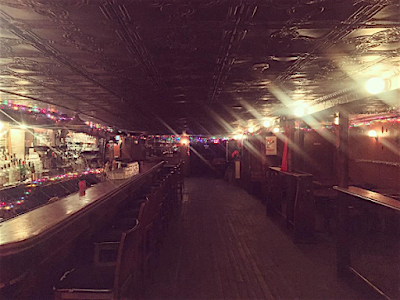 [An early morning look at the Grassroots from last month]

The other retail tenant in the building, Sounds, closed in October after 36 years in business. (Sounds owner Brian Fair died in early December after a short stint in the hospital.)

20 St. Mark's Place, known as the Daniel LeRoy House, was built in 1832. It received landmark status in 1971... and added to the National Register of Historic Places in 1982. (Find more history of the Greek Revival house here.)

RIP Brian Fair, owner of Sounds
Posted by Grieve at 4:30 AM

Thank God for that landmark designation, but I shudder to think what kind of "high-end tenants" these clowns have in mind for that location.

I hear that an Indian restaurant is going into the space formerly occupied by Sounds. I also understand that the owners of the Grass Roots Tavern are going to raise some prices for top shelf liqueur. They are planning improvements to the men's and ladies' facilities (Thank the GODS!!!).

Glad to hear Grass Roots is staying put. If they were to go, forget it man, that would be one of the last nails in the coffin for me.

What are they thinking? Gucci n Grassroots?!

One of the last nails in a coffin with room for thousands of nails.

First bar I ever went to in NYC (or the States for that matter). Hope it survives longer than five years - a great place.

And we have our answer. 2017 is the last year for Grassroots.