Reader report: Why does this block of East 4th Street smell? 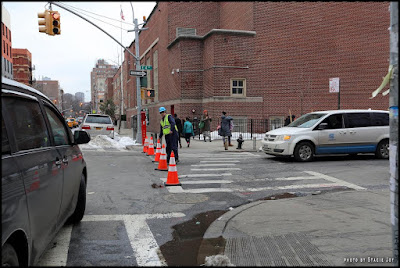 From the EVG inbox...concerning East Fourth Street between Avenue B and Avenue C

A terrible smell has been lingering since the blizzard like a dead dog — or, not to be overly dramatic, a dead person.

This morning the area was surrounded by yellow tape. A police cruiser was blocking the street to traffic, and a Con Ed van was parked at the scene.

EVG correspondent Stacie Joy had actually taken some photos of the block, which is now closed off for Con Ed and other assorted emergency vehicles.

A resident says that Con Ed is here responding to a service outage. As for the possible source of the smell, one of the Con Ed workers said that their meter readers didn't pick up any natural gas. Yay! 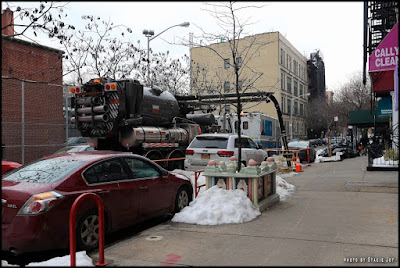 Meanwhile, farther down the block at Avenue C... the FDNY was on the scene... 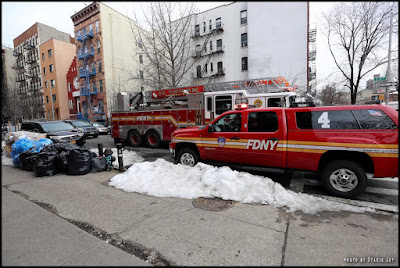 The FDNY, witnesses said, was there because of a manhole fire (it is manhole fire season!), which they believe led to the service outage up the block.

A manhole fire could cause a smell ... though residents have noticed the aroma going back to Sunday. No one could place the smell. Some suggested a very large dead rat. Some went with fermenting garbage. Another theory included "maybe someone hit a deer."

Other theories are also welcome, probably.
Posted by Grieve at 1:28 PM

Whoever smelt it, dealt it.

I live on 4th between A and B and have noticed a smell in my apartment on certain evenings randomly the past month.

Oh like you've never had a bean burrito before!

Or as our friend in Montana said, "You need to move to Brooklyn."

I live on 12th btw A and B and it smelled kinda manky the last 2 days over here!! I think it has something to do with all the ground water the construction at the former "Mary Help of Christians" site.