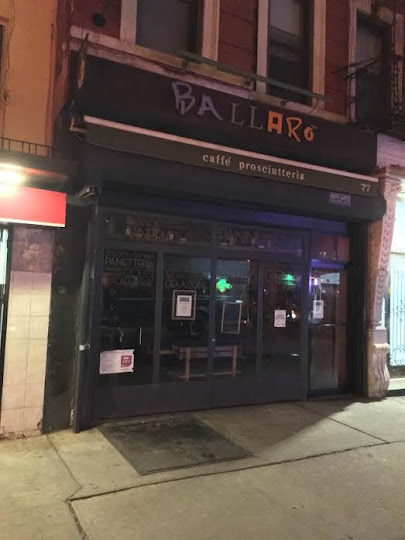 The all-day cafe at 77 Second Ave. between East Fourth Street and East Fifth Street has closed.

Several readers noted that the space was dark all week... and we received confirmation of the closure yesterday.

The low-key Ballaro, which served Italian coffee and pastries during the day, and beer, wine and small plates in the evening hours, opened here in May 2009. The owners also run Cacio e Pepe and Cacio e Vino nearby.

As we first reported last August, the cafe made headlines after drunken Taylor Swift fans apparently terrorized the staff by demanding they play more of the pop star's music on the house stereo. (Not really a Taylor Swift kinda place, you know?)

One of the women in the group took out her phone and said that she was going to make a viral video so no one would come to Ballaro anymore. Now this, more than anything, upsets me because Ballaro is a gathering place for neighbors, friends, lovers and strangers alike. We have a community that gathers in Ballaro and we all love and support each other and welcome anyone in our restaurant and bar. To possibly lose all that because of someone’s tainted point of view on social media, would be the worst thing.

My mission is to make everyone who enters through the front door feel like they are at home, because sometimes New York hardens even the best of us and we forget the true values in life: community and peace.

The owners passed along this message to us:

We want thank all of our customers and staff for the support and hard work over the past 7 years. With rising cost of operating a small business in NYC and the changes in the neighborhood, we could not longer stay afloat. Feel free to drop by our other restaurant Cacio e Vino across the street from Ballaro. Thank you again to everyone who helped to make Ballaro a place that will truly be missed.

Previously on EV Grieve:
Why Taylor Swift fans treated the staff like shit at Ballaro on 2nd Avenue
Posted by Grieve at 4:28 AM

Email ThisBlogThis!Share to TwitterShare to FacebookShare to Pinterest
Labels: Ballaro, restaurants that are now closed

This breaks my heart. The owner and staff were warm and charming and really made a welcoming neighborhood spot. I usually only visited in the mornings and afternoon, dinner had become crowded and noisy.

I noticed a few months ago they were opening later and later and missed my morning lattes and pastries. The owner said the neighborhood was changing and she was clearly not happy about it - this was shortly after the Taylor Swift "fan" incident. I think she really wanted to be a neighborhood place but the new "neighborhood" is not what she envisioned.

The Coffee Project or whatever it's called around the corner is too pretentious for me with their "deconstructed latte" - and so small it's claustrophobic.

Anonymous 4.42, I too am gobsmacked! This was my local cafe, and I can only echo what has already been said. They were extremely friendly & neighborhoody. They were very good & by EV 2016 new standards, quite reasonable.
Ballaro RIP.

Sorry to hear that they are closing, but the Taylor Swift story remains extremely dubious.

The new people moving to our neighborhood apparently do not cherish or patronize these type of businesses, they are spending their money in another way. I have not noticed any sports bars closing just quiet civilized businesses. This may not be a case to blame on the landlord (yet) but the changing demographic.

It's amazing to me that there are so many empty retail spaces not because businesses don't want to open, but because landlords are charging ridiculous amounts of rent. We need a law that says landlords cannot write off empty spaces as a business loss.

:( liked this place. so many closings these days.

Such a bummer. Loved this place. This ruined my morning.

It was nice to have a place where the staff and patrons actually have conversations. Now the choices for a coffee break or quiet lunch treat are places where everyone is sitting with a laptop and ear buds and no one acknowledges one another. Where is the sense of neighborhood or even humanity??

This is a tough one. I love this place. This is exactly the type of place that makes a neighborhood better. You'll be missed.

Bring on the velvet-rope, entitled-kiddie bar, I assume.