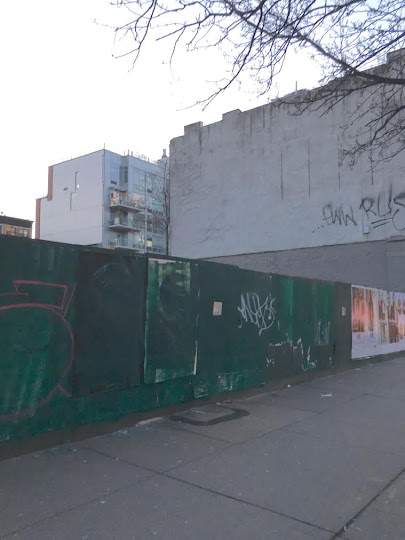 [At the former Peter Stuyvesant PO on East 14th Street]

However, there's one new development that we haven't heard much about of late — an 8-story retail-residential building featuring 114 units at 438 E. 14th St., site of the now-demolished former Peter Stuyvesant Post Office just west of Avenue A.

Benenson Capital Partners, whose company has owned the site since the 1940s, is teaming with Mack Real Estate Group on the project. Here's info from the Benenson Capital website:

Benenson and the Mack Real Estate Group have formed a joint venture to develop a mixed-use residential and ground floor retail property in New York City's East Village. The 80/20 property will provide both market and affordable housing units. The property is located less than a block from the L train and within blocks of Union Square, which is one of New York's busiest subway stations. Construction is expected to begin shortly and end in late 2016 or early 2017.

The listing, which features two retail spaces, includes a rendering — the first that we've seen — of the new building... this is on the East 13th Street side looking east toward Avenue A...

No mention of the Yosemite-like geyser that will be going off on the hour, every hour, in the lobby. Surely that's an amenity right?

This one looks like the newly completed building on A at 12th street. One silver lining there will not be a commercial space on the 13th street side so at least there is no chance of another sports bar opening here someday.

At some point there will be an application process and lottery for the 20% affordable units. The project is being financed by the NYS Housing Finance Agency, which operates as part of NYSHCR; the nyhcr.org site has information about applying for affordable rentals, though not yet for this site. From what I've read the odds of getting an apartment through these lotteries are extremely low, but someone will get lucky.

Any idea what the few affordable apts will rent for? On the NY housing website even the low income apts require more than I receive, so far.