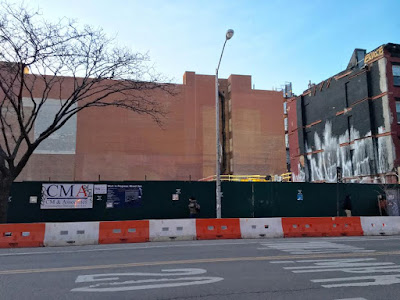 The very first section of developer Douglas Steiner's incoming residential building along Avenue A between East 11th Street and East 12th Street is now visible (as of yesterday) above the plywood as the condofication of the former Mary Help of Christians property enters the next phase... 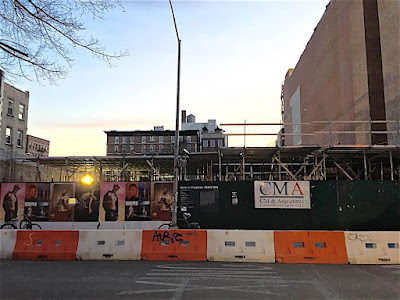 ...and via the handy blogger portals on Avenue A... 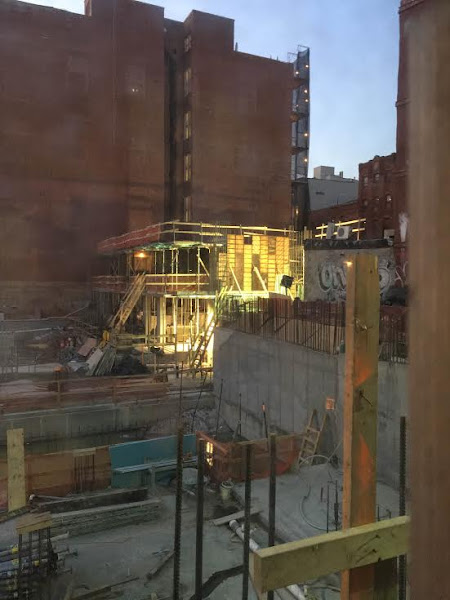 Meanwhile yesterday, The Real Deal learned that condos in the 82-unit building will start at $1.1 million for a 1-bedroom home. In total, Steiner hopes for "a sellout of nearly $215 million" for the project, which will be a record for the neighborhood.

Steiner’s property will comprise one- to four-bedroom apartments and several penthouses as well as 16,000 square feet of amenities, including a 50-foot-long pool, a spa, a gym, a library, a playroom, parking and a landscaped courtyard and rooftop gardens. Paris Forino is doing the interiors.

“It’s an epic project, years in the making, said Douglas Elliman’s Fredrik Eklund, who is heading up sales with partner John Gomes.

Speaking of years in the making, neighbors will have another 18 months of construction to enjoy until the building is complete, TRD reported.

Eklund also released new renderings of the project, which was originally going to include 158 rental units, with 22 of them designated as affordable under the Department of Housing Preservation and Development's Inclusionary Housing Program. However, in a swticheroo first announced last February, Steiner's reps told CB3 members that the building would instead be market-rate condos.

A PRIVATE RETREAT IN THE EAST VILLAGE. Excited to announce Steiner today, our new 82-unit development with one to four bedroom condominiums and penthouses enhanced by over 16,000 square feet of amenities including a 24-hour lobby concierge, 50' long pool, spa, gym, library, playroom, parking, and lush courtyard and rooftop gardens, all ensconced in New York's most eclectic, intriguing, and authentic neighborhood. This $215M sell-out at 438 East 12th Street is brought to you by the developer of Steiner Studios. Designed by Paris Forino. Priced from $1.1 million. And sold by EklundGomes. ⚡️ www.438east12th.com

And a better look... here's the view looking at the northwest corner of Avenue A and 11th Street... 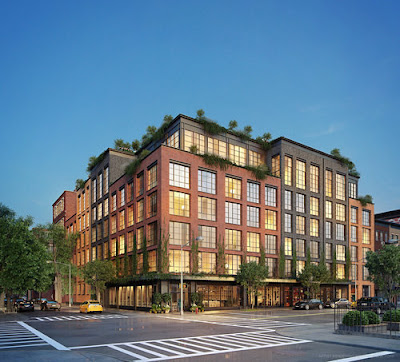 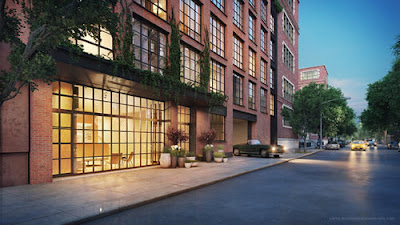 "This $215M sell-out"...well at least someone christened this piece of crap honestly, which will probably be the only aboveboard thing about it. Because I am still waiting to hear why the plan originally included 22 units of affordable housing, then flipped to market-rate condos without, apparently, a single city entity or elected official objecting, much less trying to do anything to make the project revert to its original promised intent. Wasn't the inclusion of affordable housing part of Bloomblasio's plan to add units other than luxury to the increasingly uniform landscape?

ha! auto-correct does that every time!

Wait....so two guys from the same reality TV show are building two huge residential complexes less than 5 blocks from one another?

exactly what I moved to NYC to get away from

Brick and casement windows, looks pretty good. Gojira, unfortunately Steiner realized he could make plenty of profit by keeping the building within the zoning size and without taking any tax breaks so he didn't have to look for city approval to build larger & that's when he would have been required to build inclusionary affordable units. So obviously the Catholic Diocese under-priced the land when they sold it to Steiner.

I live across the street.

Frankly I'll just be happy when this fucking thing is done. My building shakes so bad from the construction I've had things fall off shelves and break. And wait 'til those $1 million condo owners get a load of what its like to live next door to a high school in New York City. ;-)

The reason the developer could get away with ditching the "affordable housing" is because our city officials are obviously taking bribes from the real-estate industry. If you are rich enough the laws do not apply to you. This will be the largest all condo building in the EV, more to come I'm sure.

Great idea adding more population density to an area with so few transportation options, including the L Train shutdown.

Now I will never ever be able to get a bagel at Tompkins Square Bagels on a Saturday morning. It's insane how hard it is to eat around here on the weekends already with the influx of residents, and the L train is about to get a lot more crowded.

Is there an underground garage? Where are these people going to park their SUV's? What are they going to say about all the double parked cabs on the street? This is a busy block. As for inclusionary zoning - the affordable units do not have to be on site. I have not followed this project, so I don't know if this is what happened. Everyone should be aware that the affordable units, generated as part of the inclusionary bonus DO NOT have to be on site, and they DO NOT have to be new units. A developer can rehab some existing units and count those towards their requirement. You can thank everyone who stands behind this program. IN the end the number of units actually generated is quite low.

Is that a typo? Shouldn't it say A RETREAT FROM THE EAST VILLAGE?

My understanding was that the building was going to be eight stories tall. I wasn't under the impression that they needed to have low income housing unless they exceeded the maximum height. Is that not correct?

@1:19 PM: Not only don't the affordable units have to be on site, but they are transferable, meaning you can buy someone else's bonus footage.

NYC will never have affordable housing save for the lucky lottery few and who knows how many lottery apartments have been/will be given to rich campaign donors' children, nieces, nephews, relatives, cronies etc?

There should be a residency rule which says you have to live in NYC for at least ten years to qualify for a rent-stabilized/controlled apartment. Pay your dues!

De Blasio is a total, utter nothing of a mayor and I can't wait to vote him out of office. NYC needs a true progressive mayor, not a rich's shill like him.

Remember, folks…these are the slums of the future.

Can someone guide me to place I can report the damaged trees due to over sized construction vehicles on this site? And the workers are keeping 7-11 open. Gross.

Remember the Haitians put a hex on Giulani. Bad karma for all involved.