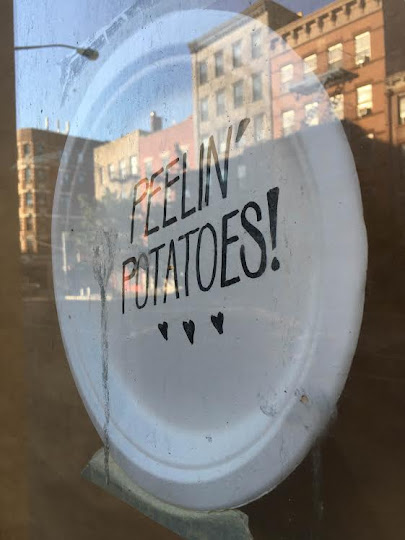 Over at Empire Biscuit, the 7-month-old disposable plate posted to the window notes that they are (still) peeling' potatoes here at 198 Avenue A between 12th Street and 13th Street.

The quick-serve biscuiteers have only been open a few days this year. They announced reduced hours in January, and then never reopened. Empire Biscuit owner Jonathan Price promised a return in March. That never happened.

Yesterday, several pages of legalese arrived on the front door... 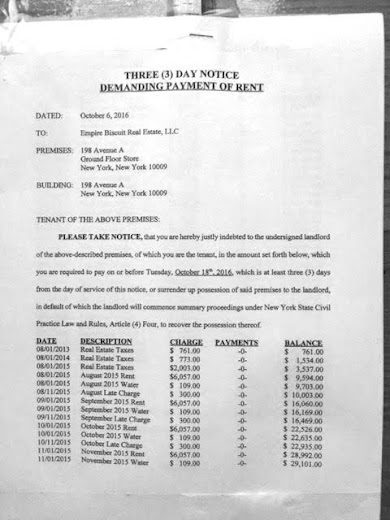 According to the paperwork, it appears the biscuiteers haven't paid the rent — a little more than $6,000 a month — dating back to the summer of 2015. (There are also some early unpaid real-estate taxes.) Not sure what the total bill is. The front page has $29k and change through November 2015. The rest of the paperwork is taped pretty well to the door.

Anyway, ownership has until Tuesday to pay up or surrender the possession of the property, per the paperwork.

Back in the summer, the City Waste Services of New York dropped some legal papers off here to collect a debt.

Empire Biscuit opened to some fanfare in the fall of 2013.

Their Facebook page still says they are "Always Open". They might want to update that now, and turn off the lights while they're at it.

Behind that now iconic disposable plate sign there is a mystery that may never be explained. This was not another $1 pizza place, biscuits are made from simple and for the most part inexpensive ingredient, the mark up seemed good enough to sustain the "Empire". It did not appear over staffed, and was often busy when I was inside or just passing by. Despite what the haters had to say when this placed opened I thought it was a good addition to the block especially a block which has little outside of sports bars now.

I found the doors (solid wood) a little uninviting. The story of Empire B. when it is told, will probably be a cautionary tale to people who want to open these very niche stores in the EV.

Totally agree with the comment about the doors. Those huge doors opaque doors with no windows were probably really expensive but totally offputting. Reminds me of how Diablo Royale, that Greek place, and moonstruck all failed in part I think because of the entrance to the restaurant.

The biscuits were good but they coulda rented a much smaller place it seems and not have had to pay such high rent.

"The story of Empire B. when it is told, will probably be a cautionary tale to people who want to open these very niche stores in the EV."
You mean like bagel shops?

This has all the elements of a mystery to rival The Girl on the Train: The Boys of Empire.

Despite what the haters had to say when this placed opened I thought it was a good addition to the block especially a block which has little outside of sports bars now.

9:17, I live on the block as well. When Empire Biscuits first opened, the "haters" (sidebar: FUCKING MORATORIUM ON THIS STUPID WORD) objected to Empire Biscuit's interloper attitude -- catering to the "drunks" who torture residents instead of the residents themselves -- and to the overall outsized hype that surrounded its opening: bouncers, faux crowds, Beatlemania-esque eating biscuits off the floor because they are just that good.

As time went on, we objected to the utter incompetency: the constant closings despite the hubris of thinking they could manage a 24/7 business; the lame excuses for said odd hours; angry mothers going "Deliverance" on our asses in the comments for not worshiping their precious sons.

All that said, if they had managed to get their shit together and were open right this minute, serving their wares to bearded guys and the Pinterest chicks who love them, I would begrudgingly congratulate them. I wouldn't support them, because I'm a humorless vegetarian and don't like lard cakes with bacon nor abide duck torture, but I would certainly accept them as neighbors.

But they didn't manage to get their shit together, did they? And that is entirely their fault, not in any way the fault of the people who live here who voiced complaints.

Seems that they didn't have a "good guy clause" in the lease, meaning that Price would have been personally liable for the rent, but if he vacated voluntarily in a set time he would have been released from his obligations.

Using the rule of thumb that rent should be 6% of sales in the restaurant biz, they should have been selling $100K of biscuits etc. per month. That's a lot of biscuits. Or cupcakes. Or dumplings...

I wonder what "theme" the next bar will have that eventually opens in this space?

So are they peelin' potatoes anymore or not? And is "Merica going to serve biscuits too, 'cause there's nothing more "Merican than biscuits. Empire Biscuits may be gone, but the Fratboy Mentality that gave birth to it is alive and well. The 'Merica guys should take note of this disaster and then look back at how to do it right with the original restaurant named America, where Rosa Mexicano is located now. It celebrated America, instead of mindlessly making fun of it, and served some pretty good food, and was a great place for celebrations and small and large groups alike. Oh, and they didn't have any racist items on the menu either, or claim they were just joking when caught.

Seems kind of strange to hate a place because it was hyped. There's inevitably silliness in marketing--it's annoying but it's also ultimately irrelevant. And you actually do want a restaurant to be popular, because if not, well, bust out the potatoes!

I too find it puzzling they couldn't keep the place open. The biscuits weren't bad. The hours were good (you can't seriously object to a 24-hr place in the EV). It often looked busy when I went by. Obviously there was more going on...you can't run a restaurant on cheekiness alone!

The funny thing about running a business is... you gotta RUN the business. When they did keep a few hours, it was one private party for their friends after another. Empire Biscuit was basically Beardo and Perma-Grin's adult tree fort.

Really baffled by this weird saga. Unless people have been living inside Empire Biscuit this whole time. Otherwise I don't understand the whole hunkering down under some false pretense of "renovating" or whatever. I would think it better to keep the doors open and sell some biscuits, make some revenue however scant than to shut down completely. Open the doors, sell freaking candy and gum or whatever. In other words, can anyone rationalize this for me? What is the thinking behind keeping up such a charade for the better part of a year. Wouldn't it be better to just break the lease, give up your deposit and vacate with tail between your legs?

wait, what happened with mothers?

Listen carefully, Sarah: No one "hates" anyone or anything. Complaining is not hate, and complainers are not "haters."

Sarah: If you don't actively resist marketing you lose the power to think independently. Companies spend millions and millions on marketing because it WORKS. I welcome pins stuck in the balloons.

I guess some millennials (and the owners of Empire B. were Ms) were busy on twitter or snapchat or whatever and missed the lecture: "Opening a small business" at the super college they attended (certainly not Baruch--not good enough for them). If they had paid attention they might have learned that when you create a business plan you must think of: rent, utilities, insurance, taxes, salaries, cost of materials, and a contingency fund. Then you calculate how many items you need to sell in order to keep afloat each month. But of course if you are a M. you think that your entitlement will guide you. It doesn't work that way. There is nothing to suggest that even if the owners have changed their pattern--and kept the business open regular hours they would have succeeded. They were in some distorted reality world of their own. Yes, some businesses are created by young people and they succeed (think Dos Toros now a small chain). Why have they succeeded? Good food, reasonably priced, good business plan. Empire will not be missed except as a whipping post /touchstone of failure.

Hear! Hear! This has been making me insane and I don't even like biscuits.

Wow, some folks posting here must be business geniuses the way they are schooling the owners of EB right now. The only thing we know is that we don't really know what went wrong with this place. We can only guess so until something official comes from the owners please cease the "shoud-a" "would-a"s.

Sorry, dude, but people who are criticizing without a sound basis, merely out of irrational resentment, closed-mindedness, arbitrary contrarianism, or envy...those people are legitimately called "haters." Don't try to tell me such people don't exist, even in the precious EV. All haters are critics. Not all critics are haters. Being angry at a restaurant because the patrons are obnoxiously loud late at night, fine. Being angry at a restaurant because its hype is dumb? That's some clove-cigarette-smoking 12-year-old hater stuff.

@2:28 PM: Do you hAve an opinion on their being closed for months with the lights on while not paying their rent? Is that loveable?

er .. sorry, Sarah, but this isn't a thing. At least it's not here in NYC, so your putdown attempt is incoherent, possibly provincial.

"Hater" is a feeble, reductionist term used by people who are too dumb or too lazy to parse dissent.

They also screwed their employees by not paying them for the last couple of weeks they were still open.

maybe a book store will open here. or an art gallery. or a puppet museum. fingers crossed.