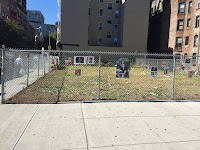 Catching up to this piece in the Post from yesterday ... as previously reported, several dozen former Second Avenue residents filed a $17 million lawsuit in the wake of the deadly March 2015 gas explosion.

The suit ... alleges the city and Con Edison, along with the owners of the restaurant Sushi Park and contractor Neighborhood Construction Corp., failed “to observe significant and dangerous ‘red flags’ … failing to take any steps to protect the public and their property.”

In denying any fault, the city said the damages were caused by Con Edison, the building’s managers, and the five people busted for the illegal gas hookup blamed for the blast.

The lawyers representing the tenants stated: "We believe that the city’s failures were not of the nature of misjudgment in discretionary acts but rather a fundamental failure to carry out ministerial acts and essential functions."

As for Con Ed, a spokesperson said simply: "We will address the matter in court."

In February, the DA charged No. 119 and 121 landlord Maria Hrynenko and her son, Michael Hrynenko Jr., with involuntary manslaughter ... as well as contractor Dilber Kukic and an unlicensed plumber, Athanasios Ioannidis. (A fifth person, Andrew Trombettas, faces charges for supplying his license to Ioannidis.) All pleaded not guilty.

The lot that housed 123 Second Ave., one of three buildings destroyed following the explosion, recently sold for $6 million to Ezra Wibowo under the LLC 123 Second Ave. Corp. There haven't been any details divulged about what might be coming to the property.
Posted by Grieve at 4:20 AM

Make the City pay! The landlords just suffer due to the City's ineptitude.

The city paying means we pay, idiot, and the city had nothing to do with this. It was the Hrynenkos, who did their best to deceive Con Ed, and messed up rehooking up their illegal tap.

Gentlemen, start your lawsuits! The lawyers lined up at the start line roar! "Millions... More millions"... The checkered flag is waved. And... God, here we go again.

@10:28 - I'm curious why you say the city had nothing to do with this. What's the source of your information?

The City always pleads immunity as a defense. As long as the plaintiffs served a proper Notice of Claim, I don't see how they will be granted immunity. After that, they duke it out like any other defendant.