Soothsayer has been closed lately; owners seeking an upgrade to full liquor 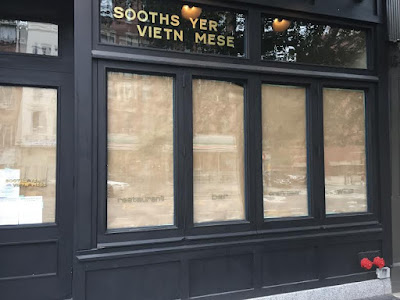 Several readers passed along word that brown paper appeared in the windows of Soothsayer, the Vietnamese restaurant at 171 Avenue A, early last week. There wasn't any accompanying note on the door/windows or on social media about a temporary closure. (Soothsayer was closed last week and through the weekend.)

However, someone posted paperwork on the front door about CB3's SLA committee meeting this month, where reps for Soothsayer will appear to upgrade to a full liquor license as well as a license for the rear garden. (You can find their paperwork for the October meeting at the CB3 website.)

The restaurant between 10th Street and 11th Street, run by siblings Stephan and Kimxuan Brezinsky who grew up in Stuy Town, opened back in January.

In July 2015, Soothsayer upset a few neighbors after asking for support for a full liquor license and use of the back patio. Soothsayer reportedly withdrew its application at the July 2015 CB3/SLA meeting.

In September 2015, CB3 OK'd a beer-wine license without use of the outdoor space. The proprietors also agreed to hours of 5:30 p.m. to midnight during the week, with opening hours of noon on Saturday and Sunday.

The October SLA committee meeting is Oct. 13 at 6:30 p.m. Location: The Thelma Burdick Community Room, 10 Stanton St. at the Bowery.

Previously on EV Grieve:
Incoming restaurant on Avenue A asking residents to rally for their liquor license and back patio (42 comments)
Posted by Grieve at 4:15 AM

Email ThisBlogThis!Share to TwitterShare to FacebookShare to Pinterest
Labels: 171 Avenue A, Soothsayer

Neighbors might want to find out if the "back patio" is legal. The zoning regulations have rear yard and open space requirements, meaning you can't simply extend a restaurant as you please. The Community Board can recommend a liquor license, but they don't have the authority approve an illegal structure or use. The DOB is charged with enforcing the zoning regulations...

This place always had a full bar, but seldom had a full dining area. Getting a full liquor license, use of a rear patio and open until 2am won't solve the problem that people don't want to eat there. But it is a good plan to become a bar. They've hardly been open 6 months and they're already in trouble and scrambling for full liquor. The idea is you first prove that you're a good, successful restaurant and a good neighbor.

I walked past here last week and noticed the covered windows. I am curious if it is a closing. They never seemed to be that busy. Damn.

I get off at the bus stop directly in front of this place every night and almost never see anyone in there on weeknights. You want good Vietnamese food, go to Sao Mai on First Avenue, don't waste your time with a place that can't make a go of it unless they have full liquor. Cos once they go under, as they inevitably will, the full license remains behind, to go to the next short-term renter.

Great people. Great food. Beautiful job on the space. A legitimate restaurant. I hope they succeed.

CB3's website states that they will not approve rear yard usage. If they do, opponents how show this link to the SLA to say that they are violating their own policies.

Been there a few times... Good food and good service. We need more bars like this than 13 step places..

I live above this place.

No, no no, on full liquor and a backyard until 2am?! LOL! Absolutely not. These people tried to get full liquor once before, and less than a year later they're trying again? And not only that, but a back patio until 2am?

It's not a bar. We don't want another bar. We have a bar on the block already.

You really think we're stupid? That CB3 will fall for your sacrificial lamb approach? "OK no patio, but we get full liquor!"

No on full liquor.
No on closed in loud as hell so I can't sleep backyard.

@ A Big Soothache, please attend the Community Board meeting and raise this concern or send a letter to slacommittee@cb3manhattan.org in advance of the meeting on Thursday. CB3 will listen to folks who will be directly impacted by this.

Sorry fella's but it ain't 1982 anymore. Even a legit restaurant like Soothsayer can't make the giant EV rents without a little help from a good stiff drink. Anyone who thinks they're fronting as a bar has obviously never set foot in the place. One look at their giant open kitchen can tell you as much. The owners built a beautiful space. This ain't no NYU/Frat Boy hand out. It's a grown ups restaurant. I get that a lot of the folks on here are used to having the greatest city in the world served up for them at bargain basement prices. But guess what, the 70s and 80s are over. If you can't swing with that fine. Doesn't mean you have the right to kill another legit EV biz like you did on Ave B. Backyard no. No way the mid westerners who landed here 30 years ago and are now trying to convince everyone 'real' New Yorkers will go for that. But full liquor shouldn't be in question.

The first thing I notice about this place is the giant bar, pressed up against the completely open facade not the open lichen tucked in the back so . . .if they get a full license and 2am hours I am sorry that bar will be filled with cocktail swillers and the food will be an after thought. Seen it happen too many times and the risk is too great. What's the legit business killed on Ave B?

Most NYC restaurants don't display their kitchens in the front window. Especially since venting takes place out the back of the building and duct work is priced per foot. Soothsayer does have a huge kitchen. They wouldn't have spent the money or given up the valuable real estate if they didn't intend to use it. Mercadito Cantina was a legit restaurant with a well known chef. They teatered on the edge for years before finally folding in '08. The space sat empty for almost 8 years. Those guys are open and thriving in Chicago now. All those jobs, in Chicago. Rent paid, to Chicago. Taxes paid, to Chicago. Local suppliers in Chicago get their business now. Not outer borough NYC suppliers. The staff that may have gone over to Boxcar to get an after shift drink now does that IN CHICAGO. Oh wait, Boxcar is around anymore is it?

10:44 PM: One restaurant moves to Chicago and it's an economic disaster for New York City? Jesus.

That's one example of too many to mention. And yes, if you were employed there it is a disaster.

i love this place so much and hope it comes back soon! i would go there even if its just beer and wine!! please come back soon.