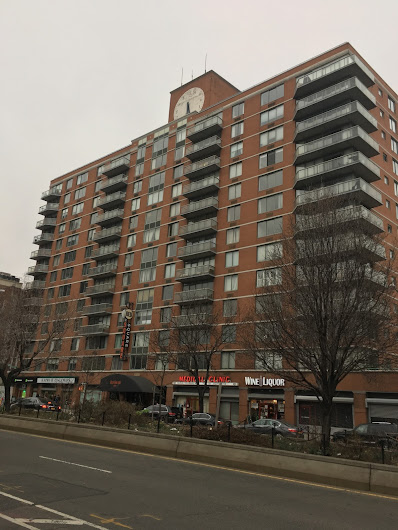 Last fall, Red Square, the 13-floor residential complex at 250 E. Houston St. between Avenue A and Avenue B, changed hands for a reported $100 million.

A letter to residents noted some "very exciting changes" coming to the building, which was apparently dropping the Red Square moniker. Among other things, the common areas would be refurbished.

The renderings that accompany the listings show a luxurified version of its current self... with more high-end retail than what's currently in place... 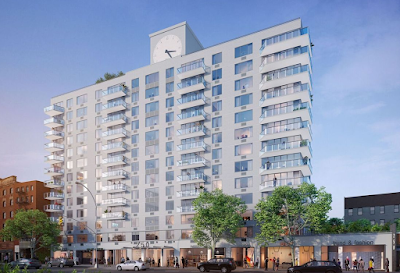 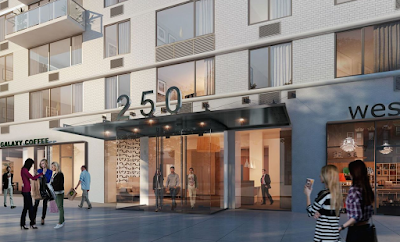 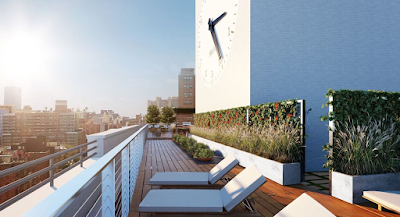 ... and another view of the entrance... with some awesome scalies... 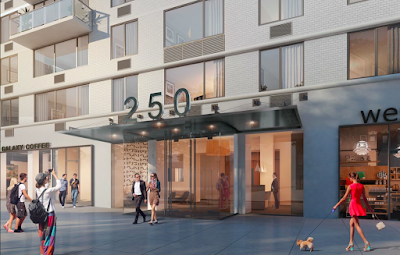 Not sure if this is really the future or just wishful thinking.

The building opened in June 1989. Workers removed the building's statue of Lenin from the roof in September.

New ownership makes it official at the former Red Square on East Houston
Posted by Grieve at 4:20 AM

I think the facelift looks good. And that stretch of houston is a wasteland for retail; subway, sleepy's, check cashing etc.

And now that I have seen the larger images on a computer screen, disgusted. Seriously? Yet another "Utopian" developer vision of New York City in which people of color don't exist? Absolutely shameful, and very telling. (Yeah yeah I know, an art department put them together, but SOMEONE on the development side had to sign off on them.)

". And that stretch of houston is a wasteland for retail; subway, sleepy's, check cashing etc."
I don't like 'em, unless you go and shop there, then those are essential services. Funny how that can be.

Well, considering that most xerox [retro word, huh?] places have closed long ago, it's great to have FedEx Office there; it's a fast, efficient 24-hour place to get copies and other services.

The transition from the drab proletarian era of Lenin to the glitzy whitewash that embodies the Putin kleptocratic oligarchy is almost complete. This monument to luxury living in the midst of despair should fit in perfectly with the Houston Street Horridor.

PAINTING THE BUILDING WHITE TOTALLY MAKES IT WORTH PAYING THREE TIMES AS MUCH FOR AN APARTMENT.

That photographer lady in the graphic is about to get hit by an out-of-contro taxi. Quick someone tell her.

The owners of the building @ 12th & 3rd did the same thing. And the money is rolling in.

Wow the sidewalk is suddenly so much wider. Fancy people get the best sidewalks.

Ironically Red Square was considered "luxury" with a small "l" when it was first built.