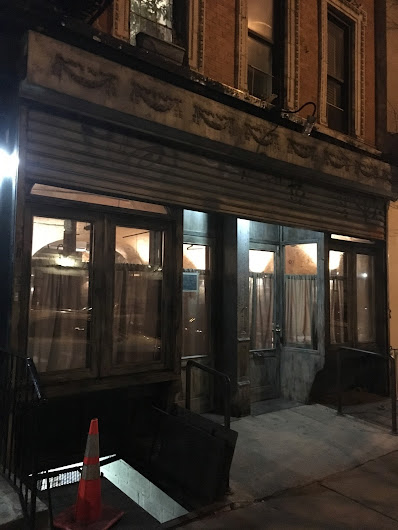 The owner and executive chef of Pardon My French on Avenue B are behind this Moroccan venture that officially debuts tonight at 215 E. Fourth St. between Avenue A and Avenue B.

Florence Fabricant had this to say in a mini preview in The New York Times:

[Executive chef David] Pegoli, who also worked at Luksus, has created a menu of six couscous preparations, as well as four tagines, including a lobster version, served in a collection of the elegantly embossed ceramic vessels of the same name.

CB3 originally recommended to deny the applicant's bid for a full liquor license for the space last September... in part because of the proposed 4 a.m. closing time on a side street that already had 18 full on-premises liquor licenses within 500 feet. The local block association was also against the full license. (The PDF of the official minutes are here.) The SLA website shows that there is an active license here for Restaurant Wine.

Until May 2016, the address was home for 13 years to the Italian restaurant In Vino.

You can find Chouchou's menu here. Chouchou is open daily from 5 p.m. to midnight.
Posted by Grieve at 4:17 AM

"...the proposed 4 a.m. closing time on a side street that already had 18 full on-premises liquor licenses within 500 feet" - well I see they're planning to be good neighbors.

"...18 full on-premises liquor licenses within 500 feet" - yet people can't understand when I say the old EV was better than this one. At least the junkies were quiet and kept to themselves.

Looks delicious. But $30+ a plate delicious?

No Gojira, people nodding out and stumbling into you and begging/threatening you for money is not better. Trust me it's not.

$30 a plate is necessary for a "contemporary take." Somebody has to pay for all the adjectives.

@1:40 PM No one needs to trust you.
We've all experienced the occasional junkie on our stoop. It sucks.
But it's a mere phantom compared to having to navigate through the heard of morons (especially drunk ones) with their face buried in their Twitter screen. Assholes bump into you, and then look up at you like, "what the fucks your problem?".
You are not an improvement for this neighborhood. Trust me.

Anon. 1.40, the prospect of a stumbling junkie occasionally asking me for money versus the weekly, nay nightly invasion of the EV by hordes of stupid wooing drunks clogging the sidewalks to the point where they are impassible? I know which I'd choose. Yr obviously not tough enough to be living here.

The music was already incredibly loud here last night. Had to submit a noise complaint with 311 as the bass was shaking my floors down the block.

Excited to go here on special occasions, and wish them luck! This looks setup to be one of the top Moroccan cuisine destinations for the entire city. Like the Michelin rated Thai place on A, and a few of our other dining greats it is very cool to have a mix of affordable and higher end options. Fear the starbucks, fear the bank branch, but do not fear the restaurateur.

I agree with Anon 1:40, I'd rather have a crowd of irritating children than nodding, spewing harrassing Junkies any day of the week.

Walked by PMF one weekend afternoon and the music was so incredibly loud, I made a note to never go there. Disappointing as the menu sounds interesting, but it resembled Poco 2.0. I hope the new place tones it down as it would be nice to have a place for adults.