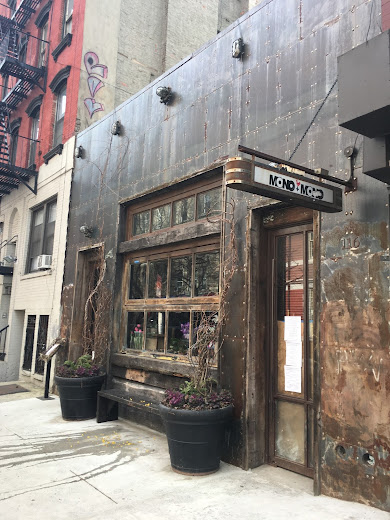 A quick item to note on tonight's CB3-SLA committee meeting... it appears that Mono + Mono (or just Mono Mono now) is making a return to its former home at 116 E. Fourth St. between First Avenue and Second Avenue.

A fire swept through the single-level structure in April 2013. (The restaurant's extensive collection of jazz LPs were reportedly spared.)

At various times through the years, Mono reps said that they would be returning. A flower shop is in the space now. This sign appeared in the shop's window last summer... 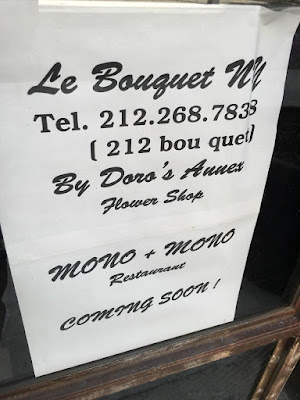 In any event, the CB3-SLA signage has been up on the storefront this past week... 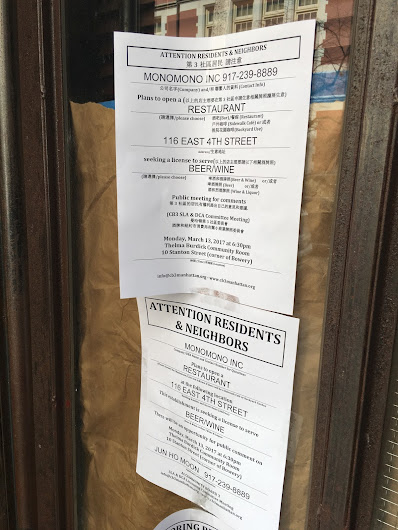 It's unclear from the materials posted at the CB3 website if the same owners are involved. The paperwork shows that the applicant also operates a restaurant on 32nd Street.

The sample menu on file with the questionnaire shows a variety of tapas, such as the mung bean pancake as well as a variety of rice and noodle dishes. (The sample menu does not list the double-dipped Korean fried chicken, a speciality of the previous incarnation of Mono + Mono.)

The proposed hours are 4 p.m. to midnight daily.

Mono + Mono first opened in August 2010. I never ate here. I know people who liked the ambiance. (This review at Serious Eats said "that the food wasn't taken as seriously as the space.")

CB3's SLA committee meeting is tonight at 6:30 in the Thelma Burdick Community Room, 10 Stanton St. (corner of the Bowery).

(Kind of) An update on Mono + Mono

What is happening with the Mono + Mono space?

How can you not bring back the fried chicken. Jesus Christ.

Woah the fried chicken and happy hour was the best part, agreed, wtf...