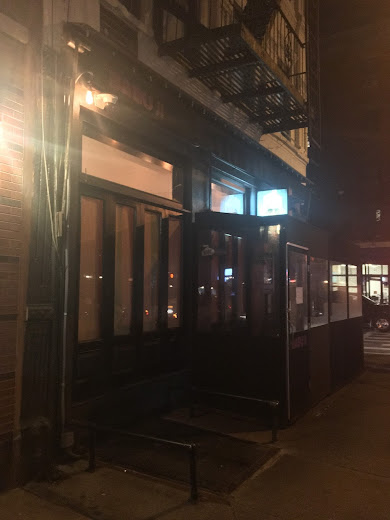 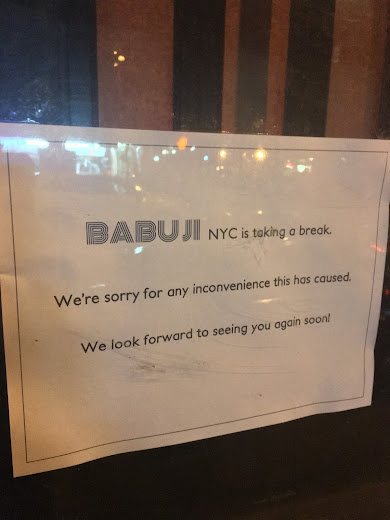 Never ate here thought of it but never got around to it. I know one of the two first plaintiffs a long time after hearing the abuse. Sorry it would be like crossing a union picket line there are too many other good places, good owners struggling against high rents to give my meager business to. I think its more then a break they are taking I think the corner is Humpty-Dumpty broke not to be put back together again.

How to run and ruin a business through greed, apparently.

I finally ate there once a few months ago with a friend who insisted we try the place. I was not impressed by the food or the way the server tried to push the "tasting menu" on us--when I go to a restaurant, I will do my own choosing!--and will not go back. I had resisted eating there because I didn't like the way Jennifer, the co-owner, dissed the local Indian joints we have here in the East Village. I love how these foodie snobs don't treat their employees with a shred of dignity.

Never enough money for some people.

Hopefully this brings an end to their little Colonial outpost on 11th and B. The way they were fawned over and celebrated was sickening, made even more so in light of the obvious contempt they have for their workers, whom they seem to consider Untouchables unworthy of decent treatment.

These legal disputes tend to favor the employees. Am I mistaken that the same employees which receive the settlement continued to be employed and hence the amended suit?

I never went to this restaurant although I was excited to here of its arrival. One look at the menu pricing discouraged me though as in yet another expensive restaurant on Ave B.... The young and loud crowd that assured this place was not for me.

Who isn't a sisterfucker, really?

I refuse to believe such obvious lies about someone that can make such divine unauthentic butter chicken and beetroot paneer.

Is it Babu Ji or Babu Gyp? I remember when the workers at Saigon Grill were picketing outside for months for their back wages, and they won a big settlement. It sounds like the owners are retreating to the new San Francisco branch until things cool off. Meanwhile just across the street you can get good Indian food without the drama at Desi Galli. Everything is made to order and their kati rolls are spicy and great for a snack or meal.

@ Giovanni: I go to Desi Galli now and then for the tasty lamb curry. I had a koti roll once, and the roll itself was hard to chew. The I realized I was eating the paper wrapping. The last two times the samosa were cold inside. I complained the first time, the second time I just ate the damn thing...

The place was all about one thing: The Bob Marley-esque Indian mascot dude. Other than that it's just over-priced street food. Never went and I look forward to their closing. Sounds like they're YUGE douche bags.

I will keep giving my business to Marsala Walla on Essex. And Brick Lane. And Thellewalla. And East Village Burritos, Tacos, Pasta, Pizza and Indian food (we all know whom I speak of).

I think I saw Sister Fucker play at Cakeshop

Really surprising they can't pay their staff. They've always seem busy, some nights it's a pain to walk near that corner: groups of basics, and ubers blocking traffic.

Donnie Trump Ignorance can be bliss I guess. Today most people pay by credit card not cash the tip is also on the credit card the server ends up waiting for the money to clear and thus must get it from the owner. This is the owners opportunity to embezzle the tips by skimming off them...Yes servers work primarily for tips they come in and some nights business is off tips are miserable a whole shifted worked for little. Then the abusive customer thinks they are better then you and your station in life is below them. People who work in "hospitality" accept the good with the bad...whole night on your feet for 8 hours and twenty dollars in tips plus sore feet. No I never worked as a server wouldn't tolerate the likes of these two owners they need to be deported back to Calcutta so they can dream about the days of a flush toilet and toilet paper instead of the right hand wiping. The 95k a third goes to the Lawyer the rest was divided between two. As far as the cost of dinner in the East Village so many poor tippers especially among the young and foreign residents. If I can not tip 18-20% for my dinner out I stay home and cook for myself.A tort involves injury so name calling does not have standing in a compliant but theft of wages does and that what the law suit was about.

Never tried this place as something always felt strange about it. BTW I love Desi Gali which is super tasty, affordable, and the people who work there are awesome. If you haven't tried - check it out !

Please support the Indian businesses on 6th St before that part of the EV gets erased.

I live around the corner from Desi Galli and get lunch from them at least once per week, trying new things there and yes the folks that work are lovely, friendly.

When and if Babuji closes don't expect an affordable restaurant to take it's place, it would be impossible to pay the rent unless it's high end, unfortunately. Heaven help us if one of those drunken brunch places open's here.

They had an unexpected "Administrative" charge tacked on to the bill in lieu of a tip, with the explanation being that tipping wasn't necessary since they paid employees a living wage. Good food, but nothing spectacular compared to other places in the neighborhood, more about the flashy décor than anything else, it seems.

All I know is those fuckers blighted 11th Street — every day, more layers of grotted oil and dessicated lassi spread all over the sidewalk around the corner of the restaurant from its front door. They'd put forth half-assed attempts at cleaning only when they were setting up their outdoor tables for the spring. Good riddance! (And furthermore, bah!) Give us a bookstore/record store/movie canteen/rumpus room there ffs.