1 week left to apply for the Stuy Town Lottery 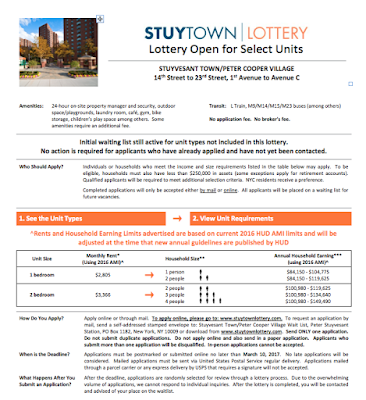 The StuyTown Lottery, a middle-income affordable housing lottery at Stuyvesant Town and Peter Cooper Village, has one week left to run.

The deadline to apply is March 10. Anyone with between $84,150 and $149,490 in pre-tax, combined household income might be eligible. We are offering one- and two-bedroom apartments.

More information, including floorplans, FAQs and instructions on how to apply can be found at www.stuytownlottery.com.

A "lottery" where the prize is that you get to overpay by that much in ST/PCV? To whom is nearly $3,400/month an "affordable" rent? And there's "overwhelming" demand?

Can you find out what those people are smoking?

For us who live here, that's "Sty Town".

I've been to these apartments, and believe me, they are not worth it.

TINY kitchens, small bedrooms. The only thing that's even somewhat a decent size is the living room because they usually double as a dining room since there's an area for a table, but that doesn't even really matter. Not worth it!

They are also that big to bait people into converting the space into another bedroom.

Exactly the ratios are offensive, to live survive and save to actually retire 85k shouldn't be spending more than $2k.

If they didn't spend a load on digital ads... who else say the lotto ads all over other websites they frequent? They could cut some cost here to make these actually affordable. Rather take my current shoebox and save a G.

This is a joke right? Or is building management and the city are just shoving this in the faces of the majority of citizens how unaffordable and inequitable living in the goddamn city and the outer boroughs are now

Oh, and 1:26 about overwhelming demand, don't believe the hype. Bruce Ratner in goddamn brooklyn is having difficulty getting buyers and renters for his shoddy blade runner towers.

I've been to these apartments, and believe me, they are not worth it.

I've got news for you people: Stuyvesant Town was built in the 40s, around the same time the Smith Houses and other housing "projex" were built. Solid construction, but for more "bang" for your buck, you might as well live in public housing.

The apartments in Peter Cooper are bigger than in StuyTown and it has always seemed to have better upkeep. But watch out for the buildings close to the river that got swamped by Sandy. They had to rewire everything and yet they still had a major blackout a few weeks ago in the same buildings that sustained the major damage. I know someone who had no elevators, lights or hot water all weekend. So much for renovations.

Seems like you save something like 500 to 900 dollars a month compared to the market rents for a one bedroom there. So if you wanted to live there anyway, it will help you out.

If you are thinking about living in the “Sty” aka "NYU Dorm", pls check out this blog for the real low down.

You people are calling Stuytown apartments small? Someone please point me to the mythical East Village, the one full of spacious apartments with roomy fully equipped kitchens. I understand fully the hate for ST, but to characterize them as small-sized apartments to fit your narrative is pretty fake news-esque.

The StuyTown report is hilarious, you'd think they were living in actual projects based on all the complaints about their living conditions. All they do is complain about REBNY, the farmers market, people like Bernie Goetz feeding their squirrels. the outdoor concerts and ice skating rink, dog poop and NYU students. But they never lived in the projects--I have, and there is no comparison, much less ice skating rinks or farmers markets.

StuyTown has its share of problems but its still one of the nicest and quietest places to live if your neighbors aren't NYU students. They love to complain about dog poop on the grounds, but that mess happens on every block with lots of dogs--just try walking around Gramercy Park these days and not stepping in a patch of brown goo, or in the summer when the stench from the dog urine is like breathing ammonia.

It's just too bad it's not more affordable, because it's a nice place to live, especially compared to buildings run by lousy landlords like Rafael Toledano, Jared Kushner, Ben Shaoul and Steve Croman. StuyTown tenants had their chance to buy the place themselves but they blew it, and even if they went coop or condo they would still complain about their Board or management company just like people do in every other building in New York. That's probably why they call it Cry Town.

Your dog crap analogy is bogus because Sty Town is private property, including ALL of the interior space. Oh, I guess the recent attempted murder/attempted rape (and another recent attack-last year-as well) did not enter your news feed? I guess you have no clue of the history here, the horrors of TS and then CWC, and how this type of management style has continued under Blackstone? There is ZERO enforcement of the QOL lease rules.

"quietest places to live if your neighbors aren't NYU students."

Bogus as well.They are everywhere, dormfication is expanding. And the just post college transient crowd (dorm style-4-5 unrelated adults in each apartment) does not follow the rules of their leases either.

From a recent Yelp review:

"Nice property, but when it comes to quality of life, until they install wall to wall carpeting it's nothing but a huge dormitory. Management is not serious at all about enforcing noise complaints and lack of proper carpeting in the apartments . Very difficult to have a peace of mind and enjoy life in your own expensive apartment when you constantly HEAR your neighbors living their life above you and next to you. And that's day and night!!"

Again, zero lease enforcement, churn baby churn for apartments. PS is no where to found except in their vehicles on their smart phones.

"That's probably why they call it Cry Town."

Hey, say hello to your employer Rick Hayduk (GM) for me. As per a comment at the STR blog:

"Potential conflicts with dog owners and bikers are avoided by lax enforcement. Conflicts over everything avoided by lax enforcement. Because like the entire real estate and political worlds, Hayduk knows that barring some major event most people are absorbed with surviving, are fairly apathetic or afraid of mgt and willing to take a lot on the chin rather than upset themselves and get angry. The people at this blog* would generally be viewed by Rick and his mgt as malcontent outliers present in any large community who can be ignored. Plus it's all anonymous, so who cares."

So what you "lived in the projects", I did, too, and so what to that? Your point?

No one says it's like the projects, they're just saying it's being run like a giant college dorm complex. Right, it's nice if you don't have loud, obnoxious, drunk, puking, pissing, shitting, littering NYU students and people who think they still live in their dorms X years out of college living next to you, and that's that blog's main beef, dummy.

Besides that they don't like how shit's run. What's it to you if you don't live there?

Say what you will about the small kitchens but my friends who live there have way more counter space than I do in my old tenement apartment that I have lived in since the mid 90s and the buildings are clean and well maintained and they have laundry in the buildings. If I had the money, I would move there in a second.

@1;03PM. 5:53PM and all other disgruntled CryTown residents. See what I mean? CryTown always crying that they live in one of the nicest properties in the city. But no one is forcing you to live there, right? The problem with CryTown is that they think they live in a gated community. They lock the gates in Peter Cooper all summer long to prevent kids from the EV from walking through the property on their way back from Asser Levy pool. They even post guards at the gates and you have to show ID to get in. Then all year long they complain about the farmers market, the dog poo the ice skating rink, their Oval Amenties like the cafe, their free concerts. I bet you didn't have any of those nice things in the projects? As for the dog poo, try walking arounf Gramercy Park without getting pedigreed dog crap all over you shoes. And the smell of dog urine in the summer around that park is as strong as ammonia. The problem with CryTown is they dont have any real world problems. The only problem they have is a sense of entitlement. Try telling the EV landlords like Croman and Toledano and Shaoul and Kushner you don't like their crappy dust filled buildings, with no cooking gas and constant construction, and see how fast they try to kick you out. At least CryTown lets you stay. Now pass a tissue, Tito, I feel a little tear coming on.

Thank you for mentioning this blog. I've lived here for 30 years and this is the first time that I've heard it mentioned as "CryTown." Well, Mr. CryTown, a former soldier no doubt just like I, very few people living in this community complain about their apartments unless they are living in a "flex" apartment. You, who seem to know the backstory of many who live here, assume that no one should complain because, supposedly, they have not lived in the projects like you have done. Bravo, but people have a right to complain if they are not getting the service that is promoted to them, I don't care if they have lived in a "project" or not. You, as a former soldier, must be aware that Stuy Town was created for vets who came after the war (that's the Second World War) and their families, and for a long time was considered public housing for those with not very much money. Perhaps you do know and perhaps you don't. If you don't, perhaps you should brush up on certain facts before you post. From one soldier to another.