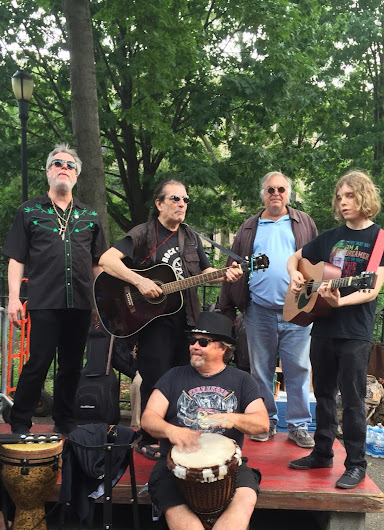 [Photo of David Peel, 2nd from left, from last summer by Steven]

Here's an update from a friend of the musician: "After life-saving open heart surgery, David Peel is on a pump resting in the hospital but he needs additional surgery, next week, to remove critical blockages."

Good vibes to David Peel who has suffered a heart attack and is in surgery.

As The New York Times noted in a 2012 profile, Peel was "a fixture at counterculture marches and demonstrations beginning in the late 1960s."

Here's footage of Peel and the Lower East Side performing with Lennon and Ono in December 1971 on "The David Frost Show"...

This is truly sad. His music is terrible yet spirited and hysterical. Howard Stern use to have him on when he was on KROCK in the late 80's I seen him a few times by strawberry fields with all his friends. I hope he pulls through.

It's probably me, but Joey Ramone kinda sounds like Peel.

Yoko doesn't look that thrilled to be jammin' with them in that video.

I saw him last summer in TSP on that tiny little stage, and also up at Strawberry Fields. That video is classic, especially the ads for the sponsors at the end. Nice to see John and Yoko getting in some extra work as backups. Get well soon buddy!

I love David Peel and his music. The first time I ever visited Tompkins Square, he was there playing with his band and I was hooked. Best wishes for a full and speedy recovery.

I love seeing Lennon on a washtub bass.

Wow. Look how far the Lower East Side has fallen. None of that wild, genuine creative spirit is left. The Corporation Realty Banker syndicate pretty much finished it off over this last decade. From vibrant cultural icon neighborhood to downtown strip mall w/ yuppie curb appeal. The times they are a changin' and for the worse unfortunately.

Get better..you have more playing to do. Prayers.
Melanie
East Village Corner