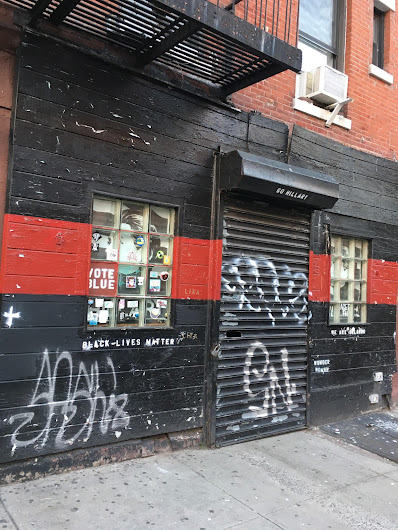 “Alan wants it to be a home for everyone of all ages, all genders, all sexualities, who all enjoy letting go and making some mischief. No judgments, no attitude, no rules, except kindness, acceptance and fun.”

I remember when the place was the divey "Wonderbar" and had a tiny back room (for actual "mischief making") that was about the size of a shower stall (with a shower curtain-type closure). This new venture sounds a bit "forced" (like everything else now in the EV), but time will tell.

So what do we have here? An immensely wealthy person, in this case an actor, who has enough disposable income to buy a bar. Please save us all from the inanities that are spawned on Face Book pages. Just say, hey folks, I'm fortunate enough to have enough money to open a bar.

Wow the comments on here are hostile. Time to maybe leave NY?

Home for everyone, including the middle class and working poor being squeezed dry and priced out of this city, Alan? I assume there won't be a burly bear bouncer or bull dyke at the door with the exclusivity list ipad

Yeah, cuz NY is all sweetness and light. Time to maybe find a new safe space?

Seeing AC around the hood is an absolute delight, wish him well... but errrrr... wish they kept eastern bloc name, bit weird naming the place after yourself everyone knows who u are already

It sounds fun! stop being haters - at least it's not a dunkin' donuts.

I love this bar. It's a great mixed crowd, the bartenders are always friendly, the DJs play music spanning several generations. And their gogo boys look like they escaped from some sexy gulag. The only thing I'd improve is making it bigger.

I'm NOTORIOUS and I approve this message.

Maybe it's not a Dunkin' Donuts, but after a few stiff drinks it could be a Drunken Donuts.

Omg we need a local bear bar ohhhh the studs

As a gay man, I don't care one way or another. Eastern Bloc is unique. Haven't been there in years. As a 41 year old, I feel someone of my age doesn't fit in there. Cumming is in his 50's if I reckon. Frankly, many gay men are ageists. Once you reach a certain age, one is often looked down upon. I have a difficult time seeing this as a place for all people of all backgrounds congregating together. I can't really see someone 21 mingling with someone who is 50, unless they seek out a daddy. My skepticism for this bar is the concept and whom it is geared to. A younger or older age demographic? I wish him luck with his new venture. His fame and wealth will certainly infuse new energy into the place. I just wonder if it will be pretentious or too posh?

does being a great performer give one special abilities to run a bar that
“Alan wants it to be a home for everyone of all ages, all genders, all sexualities, who all enjoy letting go and making some mischief. No judgments, no attitude, no rules, except kindness, acceptance and fun.”?

do we need an establishment that has no rules and the objective ia to encourages mischief?
isn't that the big problem in the east village now. no rules.

it isn't cute. it's either bullshit or a big step forward in destroying our already almost disappeared "neighborhood".

I agree with the last commenter. I am calling bullshit. Don't get me wrong. I like Alan. He's a great performer and quite talented. But I don't see the concept materializing. All ages and sexualities and backgrounds coming together? Sounds like insanity and anarchy to me. Pass. And I am also a gay guy too. I'll stick to Phoenix and Nowhere.

"Alan wants it to be a home for everyone of all ages, all genders, all sexualities"

"Frankly, many gay men are ageists. Once you reach a certain age, one is often looked down upon."

It's a fascinating observation that applies to heterosexual male-female dynamics as well. The latter is obvious from an evolutionary perspective, but the former is somewhat baffling.

Alan -- please welcome the lesbians with wide-open arms. There are very few lesbian bars. E.V's Phoenix on 13th used to be, but then the boys took it over...sad!

Go Lesbians! Yes. Make this a bar for lesbians.

What about Meow Mix? http://lostwomynsspace.blogspot.com/2011/03/meow-mix.html