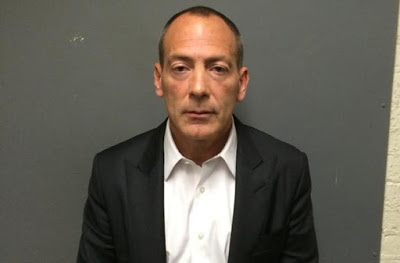 This just in from the Attorney General's office...

Attorney General Eric T. Schneiderman today announced the guilty plea of Steven Croman, a major New York City landlord with more than 140 apartment buildings across Manhattan, for fraudulently refinancing loans and committing tax fraud. Under the terms of his plea, Croman would serve one year of jail time on Rikers Island and pay a $5 million tax settlement – marking a significant precedent in the effort to combat landlords who base their business model on the displacement of rent-stabilized tenants.

Rarely, if ever, has a landlord been sentenced to serve time in jail for engaging in these practices. The jail time and multi-million settlement announced today send a strong message to landlords that the Attorney General will pursue anyone who engages in these types of practices to the fullest extent of the law.

“Steven Croman is a fraudster and a criminal who engaged in a deliberate and illegal scheme to fraudulently obtain bank loans,” Attorney General Schneiderman said. “He went to outrageous lengths to boost his bottom line – including falsely listing rent-stabilized units at market rates when his efforts to displace those renters had failed. Now Mr. Croman faces a year in Rikers and a $5 million settlement – and unscrupulous landlords are on notice that we’ll pursue them to the fullest extent of the law.”

Appearing at the courthouse at 100 Centre Street Tuesday morning in a dark blue suit and blue tie, Croman read an allocution in front of state Supreme Court Justice Jill Konsiver admitting details of his scheme directing employees to file documents – including inflated rent rolls – that would allow him to secure bigger mortgages on his multifamily properties.

“I knew the documents were false,” he said.

His sentencing is scheduled for Sept. 19

The AG's office still has a pending civil case against Croman accusing him of forcing tenants from their rent-controlled apartments. His next court date for the civil case is June 22, the 10th time it has been adjourned, according to the Cromans' Tenant Alliance.

Schneiderman first announced the charges against Croman in May 2016. Those charges included multiple felonies for his role in an alleged scheme to fraudulently obtain several multi-million dollar refinancing loans between 2012 and 2014.

The civil lawsuit, filed in New York Supreme Court in Manhattan and the product of an independent investigation, alleges that Croman used, among other things, the illegal tactic of pressuring tenants into surrendering their apartments by repeatedly filing baseless lawsuits against them.

Wow.
I wonder what his expression was and thoughts were when
his lawyer told him Rikers was really in his future.
Yikes.
Right On to the AG !
Yaay !

what happened to the part about how he abused tenants? is that a separate court case?
glad he's going to jail for something, though.

He had better serve the full year. No early release for such a criminal.

A year in jail is better than the 8 months that the NY Post reported, but it's still not enough to stop all these greedheads that buy up real estate to make outrageous profits that increase the costs of food, clothing and housing for everyone. It's also important to note that CroMagnon is not going to jail for all the tenant harassment he is famous for, he is going to jail for derfrauding a bank. The banks are the ones being protected by this case, not tenants. There is a separate Schneiderman case that deals with the tenant harassment, but it is a civil case, not criminal, so Creepy Crobar will not do any jail time for those offenses. He will probably lose some money and his brokers license, but so what? He can just hire a broker to do the dirty work for him.

Still, a year in jail for a guy who is used to summering in the Hamptons is a good start. Hopefully He will be a pariah when he gets out, I have a neighbor who spent a month on Rikers Island for defrauding the city, and he hasn't been the same since. He's like a zombie now, the social disgrace of being a convicted felon broke him. I also know a guy who has spent 20 years behind bars and it didn't change him one bit. Now he's in jail in a massive case of identity theft and had his bail set at $1 million. I doubt we will ever see him again. I wish we could say the same about Steve CroMagnon.

EV Wins! EV Wins!!.. The EV Wins!!! This is a great victory for the EV and all Nyers. Big thanks to Schneiderman.

On a city year, he does 8 months. It's stautory, not "time off for good behaivor." And it might even be only weekend, which they don''t need to tell anyone about.

Schneiderman says Croman is "the Madoff of the real estate industry" except that Madoff stole from the rich, while Croman screwed over the poor one tenement unit at a time. This is a shamefully short jail time for the multiple heinous offices Croman committed. The fine is minuscule in comparison to the ill gotten wealth that was accumulated. Schneiderman shamefully sold out here, there is certainly a story behind this plea deal.

Yeah for the Coalition behind showing his dirty deeds ..I hope he enjoys his new home and gets to see what living is really like with the Rikers Boys ...Is Toledano next? We only hope ...

He won't do a single night on Riker's Island. Croman is not an ordinary man. 'There's one law for the rich, one for the poor'

Writher for "On the Night Of" just got second season handed to them. "spoiler" this time the verdict's guilty.

Not nearly a long enough sentence for this creep.

Glad he is being convicted for something, but he deserves a higher sentence for terrorizing his tenants. Hopefully the civil cases can extricate some more of his ill-gotten gains from his criminal hands. He owns 615 apts in Manhattan by screwing innocent people over. $5 million is not enough, he is a multimillionaire many times over.

View this as a victory even though it is one for the banks and not so much for the tenants who have been harassed and forced out of their apartments, much less the "luxury" renters who move in because they too are victimized by guys like this. (It is kind of like when they got Al Capone for tax evasion. At least they got him.) Since NY state's biggest contributor to election funding is the real estate lobby this may be the best we can get for now. Go AG! Hope you are checking out Icon and Kushner too. Go Cooper Square Committee and GOLES! You make a difference to so many people. Down with uber-capitalism.

Finally one of these bastards is going into the slammer. Be nice if he had Jared Kushner for company.

I thought he was up for 20 counts of felony harassment? 1 year? A teenager starts a fight in school and gets 15 years..

will he be forced to get out of real estate?
to compensate his tenants?

the owner and gas workers at the now vacant lots on second avenue and 7th street also deserve jail time.

and certainly more than a year but that's a good start.

When you're rich, you can do anything- including paying peanuts for a huge crime and serving mere year at Rikers. To say it's a light sentence is an understatement but it's better than nothing. Let's make sure it's enforced.

"Justice for the rich" translates as leniency.

Oh the things that money can buy- like sentencing that is so much lesser than the crime.

A few years ago I got a call from a reporter from NPR who was doing a story on gentrification in the EVill. He got my number from a For Rent sign I had on the old Odessa Diner and asked me questions I couldn't answer so I directed him to the landlord, Steve Croman. The next morning my phone rings and someone is screaming incomprehensibly in my ear. It was Croman. "How dare you tell a reporter about my business." It was the first time I got chewed out by an unscrupulous billionaire. I felt proud. Croman is the Donald Trump of our neighborhood. The press is the enemy and contractors are routinely stiffed. After I rented two of his storefronts he refused to pay the agreed upon commission so we took him to court and recently received a meager settlement of pennies on the dollar. As this was going on he was renting a lavish estate on the Hamptons for $650,000 for one month to throw Roman style parties for his wannabe Cronies. Was it really all worth it, Steve? Rikers ain't the Hamptons. They are going to treat you like you treated all of us.

Karma works - he has to live with that - may all the Mother F...ers live every day in HELL - for sure they will never ever be happy or be loved by God...- money is god to them - and it always buys the best minds - who don't understand how it will effect there Karma too... - Freedom to all of the oppressed .... - may he ... in jail!!! - God helps us fight the good fight -

I have a question about the fraudulent actions of the DA's office when they send someone to jail and convict them for being physically attacked in this area by a group of extremists?
This may not be a response to the issue presented herein but it does beg the question for the neighborhood - can we send the DA to jail for a fraud that CAN BE PROVEN?

It's ridiculous harassing tenants is not a crime in NYC.

Until it is, those who do will get away with it, until they commit a criminal offense, get caught and prosecuted, a high bar it seems.

Finally one of these bastards is going into the slammer. Be nice if he had Jared Kushner for company.

Be nice if they could start a whole landlords' wing; it would be packed, trust me.

I thought he was up for 20 counts of felony harassment? 1 year? A teenager starts a fight in school and gets 15 years..


the owner and gas workers at the now vacant lots on second avenue and 7th street also deserve jail time.

and certainly more than a year but that's a good start.

Maria Hrynenko should definitely be next. "I'm a good person…" yeah, right.

Can evgrieve monitor and keep track of the current housing court case and post a story?

Subject. Croman as respondent. His business landlord is suing him. Holdover. The case can be viewed in housing court 2nd floor public access computer or at web civil using internet (if it's not taken offline). . Public record. Not sure of the case #. But it's there. Thank you.