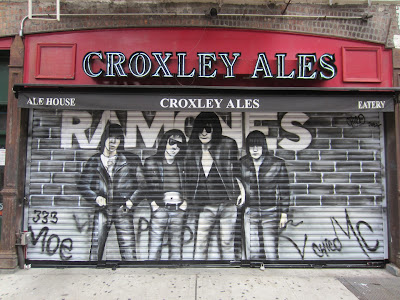 It appears that Croxley Ales is ending its run on Avenue B.

The owners behind the Irish bars Triona's on Sullivan (est. 2012) and Triona's on Third (est. 2009) are on this month's CB3-SLA docket for a new liquor license for the space at 28-30 Avenue B between Second Street and Third Street.

According to the questionnaire (PDF here) on file at the CB3 website, this is a sale of assets.

The yet-to-be-be-named establishment (Triona's on B?) shows proposed hours of noon to 4 a.m. Monday through Friday, and 11 a.m. to 4 a.m. on Saturday and Sunday. The menu is "traditional American-Irish comfort food," with fish and chips, burgers, etc.

Croxley Ales has six locations total in the metropolitan area, opening the first outpost on Long Island in 1990. The East Village location opened in 2003, peddling sports, cheap wings and craft beer. (Their website still says "We do not carry Bud, Miller, or Coors.") They expanded into the adjacent space at No. 30 in early 2013, adding an extra 13 flat-screen TVs to its sports-watching arsenal.

The June SLA committee meeting is Monday, June 12. Location: the Perseverance House Community Room, 535 E. Fifth Street between Avenue A and Avenue B.

Avenue B condos near former heroin hot spot named Poppy Lofts
Posted by Grieve at 4:30 AM

Lower Ave B has become a mini spring break strip, loud bars with open facades, boozy brunch bashes and arena level yelling from millennial sports bars. Landlords of those buildings could care less about their tenants, the CB3 seems to still not understand what an over saturation of alcohol establishment can to to the quality of life our neighborhood. If you live nearby and are tired of putting up with the noise, drunk fights, trash, urine and vomit I encourage you to attend this meeting and make your voice heard.

As the EV continues to lose affordable housing new "luxury" buildings are becoming fully occupied as the march East to the river continues the high rents and mortgage payments are driving more people to drink, so we need more drinking establishments.

The wings were excellent (and mostly cheap). I'm no "bro," but will miss this place.

Most people who read this blog - no wait, most people who comment on this blog seem to believe that if you enjoy a wing, a beer and a game that you're a trust-funded millennial frat boy.

@Anon 1:18PM - yeah, welcome to my world. I utterly hate hanging out around frat dudes, but if I swore off every place in NYC attributed to "frat bros" I would be on a strict diet of vegan grain bowls and white wine*. I'm pretty sure most of these people have been into each bar once and have screamed "YOUNG PEOPLE! NO!" and ran out.

They'd also be very confused by the racial diversity of the patrons of Croxley's. At this point it is one of the few EV bars where you will see large numbers of black, white and hispanic consumers all at once.

This was a nice spot - will be missed. Wings in particular...

I agree, I didn't hate Croxley's because it was a pretty diverse crowd and was just what it was. Lower Ave B has been a fucking nightmare the past few years - mostly because of Mama's (and what Mama's has become, as opposed to how it used to be), and Poco. Poco has been the biggest nightmare and now they have their sidewalk tables back again somehow? LOL.