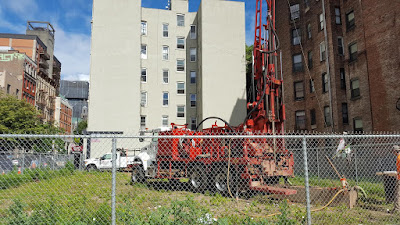 Several EVG readers have noted the arrival of a Davey Drill this morning at 119 Second Ave., at the site of the deadly gas explosion in March 2015.

It appears that workers are taking soil samples here at Seventh Street ahead of some possible new development. A survey crew was on the scene last week. One of the workers said that they were surveying the site ... and said they were there representing the buyer of 119 Second Ave. and 121 Second Ave.

There have been reports that landlord Maria Hrynenko, who the DA charged with involuntary manslaughter and other alleged crimes, was poised to sell her now-empty lots at No. 119 and 121. Lawyers have said that a sale could potentially jeopardize the settlements of the victims.

So far, nothing has appeared in public records noting a deal. In addition, there aren't any new permits filed with the Department of Buildings for these two properties. 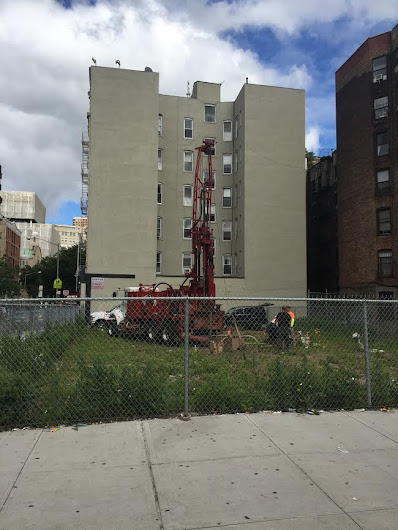 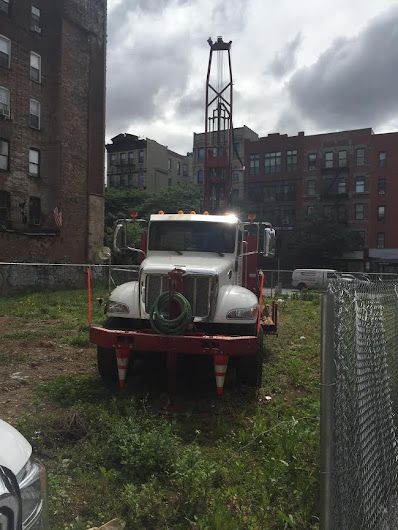 One of the workers told Steven they are doing pre-construction borings. The worker did not have any idea about when construction might begin.

Same crew there this morning.

Thank you for publishing this. I am sure the whole neighborhood is grateful for any updates on what is happening with the whole affair and activity at the site.

time to step up and stop the sale till murder charges and trial have, at the very least, started.
all you legal eagles out there?

Hey Grieve, not exactly EV but I was told by manager of bookstore across (Mercer) street that the huge NYU project to replace the (already demolished) Coles gym on Mercer between Houston & Bleecker is now on hold as foundation drillers struck water unexpectedly meaning structure as planned is no longer viable & must be rethought. Have heard/seen nothing on this elsewhere as yet but passing along...if true could mean years long delays...

Hope there will be a memorial plaque for the two young men
somewhere on/in the new building/s.

I'm glad the sale is moving forward. That corner is not a cemetery. It needs to come to life again. Whatever happens to the legal/criminal claims the courts will decide that. And I'm sure somebody will pay.

Theres' no reason to stop the sale of the land. It's not like there's evidence they haven't found yet.

@1:16pm: Do you work for Hrynenko? Because this is not about "evidence" - rather, it's about what happens to the $$$ she gets from this sale, which may quite likely "disappear" and not be available to pay out claims for loss of life, loss of property, and loss of tenancy to those who were victims of this situation.

IMO, the $$$ from this sale should go into escrow until all claims against the owner & her contractors are resolved.

the reason to delay or stop the sale is to protect the financial aspects of lawsuits by the families on behalf of their now dead children.
and for damages for lost homes and property of former tenants.
and who knows what else.

a sale just puts another layer onto an already complicated event and adds people that become part of the legal battles.
the former owner responsible for the gas expkosion should not be rewarded in any way.

I am not sure why they bother to drill? They take out all the soil anyway when they start building.

Is this going to be a summer of Fracking

This would be a "due diligence" subsurface investigation. It is often done before the sale of property. Generally there is a massing diagram already created at this stage. Depending on the purchaser and their efficiency around projects, there may be some structural design options in the works.

I checked BIS WEB (DOB) and there are no filings since the Demo in April 2015.

Construction is not going to happen overnight.

I have no problem with something else being built there; I really have a problem with this criminal owner benefiting in any way from the destruction. She is blaming the management company, but she and her son were closely involved in the day-to-day with these buildings. Any 'management company' is a smokescreen.

Does that belong to Jed Clampet

In response to http://evgrieve.com/2017/06/soil-testing-underway-at-2nd-avenue.html?showComment=1496870829487#c9181685881901770274
Soil borings go deeper than the excavation. Excavation is generally only enough to install the basement and foundation if spread footings or a mat. In this area, depending on how tall the building will be, it is likely that the borings will go to rock and then make at least one 5 foot core in the rock. If there's piles going in (drilled or driven), a full soil profile is needed so, you go through the fill, the alluvial sands, the glacial sand, and the till to the bedrock. If this was farther east, add an organic layer right below the fill.

The soil has some strength. The samples of the soil taken during the borings allow engineers to assign a capacity to withstand a contact pressure from the structure. This is needed before structural design can be completed.

Also, a well to monitor the groundwater level at the site is generally installed. the designer needs to know where the groundwater is to make plans for dewatering during construction if needed, how to design the slab and foundation walls to resist -- or not -- water pressure, and whether or not to design an underdrain system.

Sometimes, depending on the seismic aspects of the site (dynamic interaction of soil and structure), cross-hole seismic testing is done in boreholes. Put a creator-of-vibration down a hole, make a vibration, have several seismographs at set distances taking readings. Results in data to aid in design.

I could go on. As you can no doubt imagine.