Starbucks confirmed for Avenue A 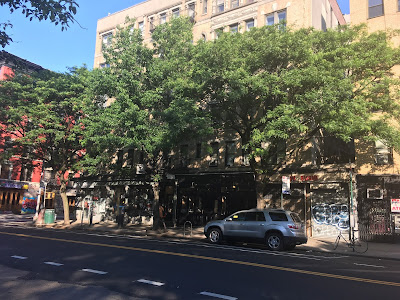 It looks like those Starbucks-to-Avenue A rumors are true. 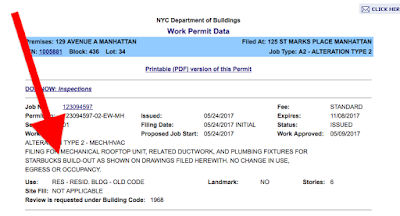 Per the ALL-CAP DOB paperwork on another work permit for the address: "FILING FOR GENERAL CONSTRUCTION RELATED TO STARBUCKS BUILD-OUT."

It's not exactly clear where the Starbucks will go... there are multiple addresses — 125-131 St Mark's Place and 125-131 Avenue A — associated with the building on the northwest corner, and there are several empty storefronts within these addresses... including the former Nino's and Hop Devil Grill... 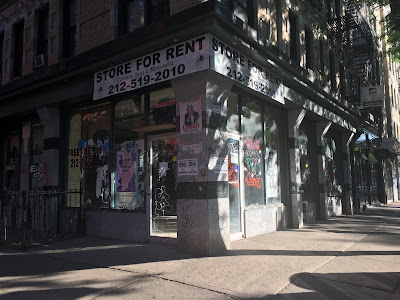 The original rumors had the Starbucks going into this prime corner space. (That makes sense.) Paper also just went up in the window of the former Yoshi Sushi... 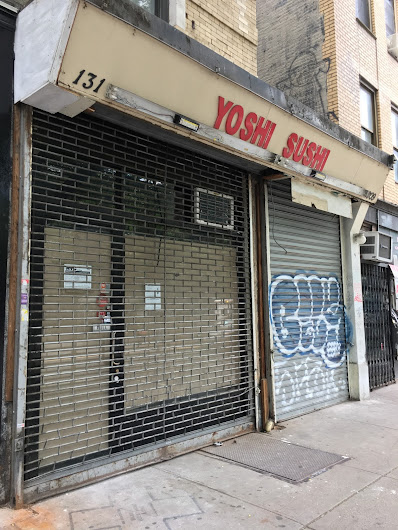 None of the work permits posted on these storefronts list the Starbucks info. That's only online as of now.

It's also not clear what kind of Starbucks this will be. Last fall, the company announced plans to open up to 1,000 Starbucks stores "with a Reserve coffee bar experience" by the end of 2017. There are four newish locations in NYC of a Starbucks Reserve Roastery, including at 10 Waverly Place.

The architect of record for the Avenue A work was also behind the new Starbucks on Waverly Place as well as several others in the city.

In any event, this will be the first Starbucks to open in the East Village east of First Avenue, where there are locations at Third Street and at 13th Street.

As for the previous tenants here, to the usual recap: Nino's closed in October 2015. As previously reported, owner Nino Camaj accepted a low six-figure amount to walk away from his remaining 10-year lease and surrender the pizza shop that he opened in 1989. He had been in a dispute with the landlord over back rent and a closure due to a gas leak in the building. Hop Devil Grill and its sister bar next door, The Belgian Room, were seized by the state in April 2015 for nonpayment of taxes.

Previously on EV Grieve:
A look at the retail listing for the northwest corner of A and St. Mark's Place

Those Starbucks rumors continue to percolate on Avenue A and St. Mark's Place
Posted by Grieve at 4:31 AM

Email ThisBlogThis!Share to TwitterShare to FacebookShare to Pinterest
Labels: 131 Avenue A, Nino's, Starbucks

firsts off ugh! second every time a big chain rents a commercial space here it's a victory for the building owner and encouragement for others to hold out for the big bucks even if it means leaving empty storefront (retail blight) for several years. If I can cling onto on tiny bit of a silver lining it is that Starbucks are not sports or theme bars. People don't usually come out of a Starbucks looking for a fight, pee and vomit of the sidewalk or yelling woo.

Ooooh Shiver me Shimbers what's an East Villager (lifelong) to do?

2017: "Thank god it's not becoming a leasing office for a luxury rental building a couple blocks away"

Well at least the crusties from T. Square will have a place to shit and shoot up at all day. I'm sure they'll do nothing but pan handle and set up shop in front. These Starbucks people have no idea what they've just done ahaha

Should have opened one further east. A is too close to 1st Ave.

2027: Well at least it's not another Gucci or Saks Fifth Avenue.

2037: Thank God it's not another abandoned bankrupt building.

2057: I'm just glad itls not another internment camp for enemies of the state and enviro-terrorists..

2067: At least it isn't flooded with 3 feet of water like the rest of the neighborhood.

2077: I remember when this whole area wasn't under water and there weren't any pirate ships docked here..

2087: My grandparents told me that once upon a time this was a nice safe neighborhood, now it's like Waterworld.

Oh good, now I won't have to spend the money to move to Wichita. It's coming to me.

This is great news! That place has been closed for too long. I'm sure the parents of kids in the playground across the street will be happy to have a place to get coffee again, after Cafe Pick Me Up left.

Told you so. I knew it. Just a matter of time. The writing is now on the walls. It is going to happen. And I am actually happy about it.

Giovani's comment just made me spit coffee out of my mouth laughing...

If people don't like Starbucks they have the option of not buying from them. The trouble is that the negative voices on EVG are generally not reflective of the "community."

This will be an extremely unpopular opinion and I should probably duck and cover but I think their coffee is eh, not great. Nor is the tea. Nor the blended drinks (syrup + ice). In other words a decidedly mediocre product. But hey, they got great branding. Branding goes a long way these days.

@4:00
If you were somewhere in middle America 15 years ago Starbucks was a sight for sore eyes considering what coffee options were available for a coastal resident. Of course there is much better coffee to be had elsewhere in our neighborhood but there was a time decades ago when many people thought Big Macs were really good hamburgers. I always thought Starbucks was coffee for people that didn't really want great coffee but a place which will pamper their desire for a customized beverage. I wonder what the percentage of customers order beverages loaded with flavoring and syrups and coffee is just the excuse? Those big paper cups are mostly a fashion accessory for walking down the street, "see I drink expensive coffee" and not so much for actual drinking. Having said that I am looking forward to the time of pirate ships which Giovanni speaks, now where can I find a cryogenic tube?

Nobody actually "like likes" their burnt bitter coffee. It more of a place to go when your are tired of work or your apartment. Or if you need a place to pee.

I bet the residents who survived the Icon purge will take this over another alcohol fueled business.

Here's what I say. I'd rather have a Starbuck's any day in our hood than another, loud and obnoxious bro bar full of drunk duche bags who think they are all that and two bags of chips, who reek havoc on the weekends and have no disregard for the people who live here. The EV has enough bars to cover half the city. Let's welcome Starbucks with open arms instead of being negative.

Starbucks is so sad. Seems a homeless drop in shelter with coffee.

There are a number of non chain businesses on Avenue A that have been in with the landlords to rid the buildings of whatever rent stabilized tenants are left. They do it by withholding gas, using the backyard area, placing ventilation systems in front of residents windows, taking $$/"a loan" from the landlord, getting free rent while residents flee, partnering with landlord in business, illegal conversions, etc…… If you poke around on DOB you can see some of the crimes.

No more Bro bars. Enough already. This neighborhood is going downhill. Its too crazy and overcrowded already. Even though I am not enamored by Starbucks, I'd rather see them than some rowdy place.

Countdown to Starbucks having pay toilets where all proceeds go to environmental groups.

Starbucks will outlast all you trolls and curmudgeons.

Evgrieve does more good in its public pee phone posts than all your silly comments. Remember that always.