A hands-on event tonight at ABC No Rio 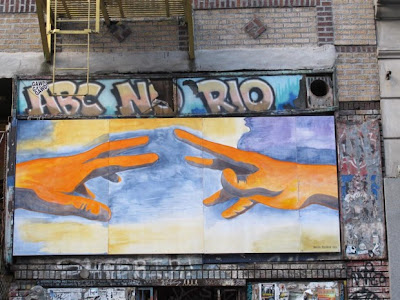 ABC No Rio celebrates the installation of a new mural by Brian George on the building's facade tonight ... Per the ABC No Rio website, the event starts at 7 over at 156 Rivington.

Meanwhile, in case you were wondering about the status of ABC's new HQ, Scoopy had an update on it at The Villager on Sept. 13. Scoopy talked to ABC No Rio director Steve Englander.

Basically, he said, instead of doing it in phases, as originally planned, they tried to bid out the project as one job. But all the bids came back too expensive — about 30 percent too high. So now it looks like they’ll be segmenting the project again and rebidding the work, hopefully soon.

ABC No Rio first unveiled the plans for the new building back in March 2008.

For further reading on EVG:
Looking at "ABC No Rio Dinero: The Story of a Lower East Side Art Gallery"
Posted by Grieve at 6:10 AM