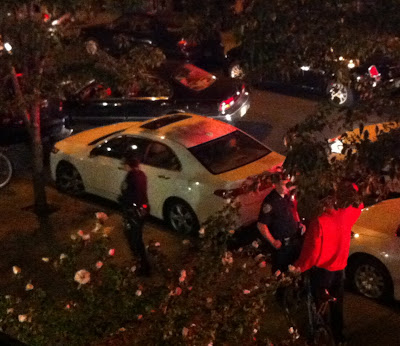 Just before 6 this morning, witnesses say that the car photographed above slammed into two parked vehicles on East 11th Street after making the turn from Avenue C.

The man who crashed the car was allegedly drunk, according to witnesses.

Witnesses described the incident, in which NYPD officers allegedly slammed the driver's head into the ground multiple times. The 6-8 officers who responded to the scene also allegedly used pepper spray on the man who was already in handcuffs and on the ground, according to eyewitnesses. One person who watched this scene unfold described it as "particularly excessive" and "disturbing and unnecessary." 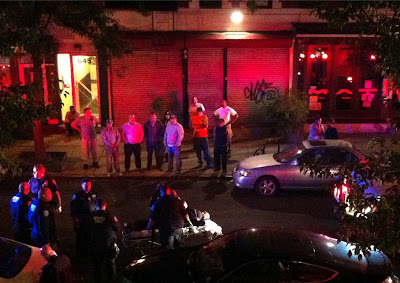 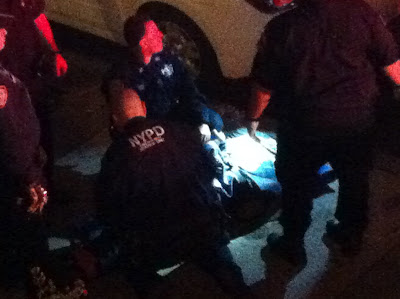 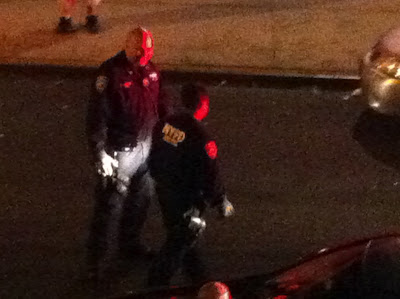 And here is the scene this morning... you can see the damage to two parked vehicles... 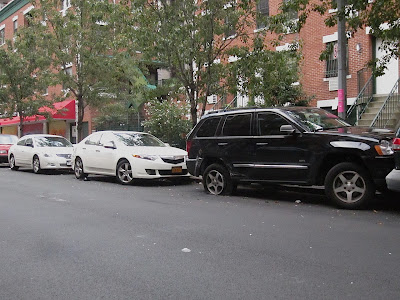 Yeah, but next time maybe he won't endanger peoples lives by driving drunk. Kudos to the NYPD.

After the accident the driver was sitting in the car (even though he was apparently able to get out) screaming and apologizing to his wife (who hadn't been in the car) and was generally unresponsive to people who were asking him questions while on the phone to 9-1-1. (All the while he was yelling something like "I'm sorry! I don't know what I did!") When repeatedly asked if he could get out of the car he finally said "no". When the first cop car showed up he got up out of the car and tried to walk away. When asked by the police if he was the driver of the car he said "no". There were probably about 20 people standing around at this point, a number of whom had seen the accident or who were on the scene seconds after. The cops asked him repeatedly if he was the driver and tried to block his exit path. The cops then told him he was under arrest at this point, he resisted and struggled with them but eventually four cops were able to take him down.

yes, there are too many drunk drivers around, too many drunks, too many of a lot of things but you don't beat somebody up with such abandon.
there are better ways to handle situations then with violence.
there is just too much of that too.

i have no sympathy at all for someone who endangers other's lives by driving drunk.

"Kudos to the nypd" @anonymous 1054? Are you fk'n serious? Thugs for the state - look at their track record of unnecessary brutality in nearly ALL they do. And remember all this if you are ever in the position to have to deal with them.... No other words for the likes of you

Scooby - I'd rather deal with the NYPD than some guy as drunk as this on the road.

Drunk driver is an asshole and the cops are dicks. He got what he deserved.

@Jeremy - until you've dealt with them personally I would reserve comment myself but you make a great point - dealing with someone as drunk as this dude appears to have been is nuts. Anonymous 1:22 is spot on in his first sentence. Nobody deserves the beatdown that these thugs dish out - they are out of control now and always have been. They answer to no person and therefor have NO consequences for their actions. I have seen too much firsthand and have too many friends who have been brutalized by these thugs - many damaged permanently for such craziness as expressing their opinions in legal, civil, non-insulting ways. And I don't live in "the 'hood" and am white (and colorblind if ya know what I mean)college educated and a member of what is the disappearing middle class.
Drunk driving is f'd up - dangerous, stupid and simply WRONG but in NO way excuse the thugs' actions. There are other ways to deal...

It's the cyclists fault. ©

The Man in the Arena said...

I think a better way for the cops to handle these situations is to make as much noise as they can with their sirens and drive as slow as they can to get there. This way the drunk will be long gone before they get there and they won't be put in a position that will be criticized no how they handle it . Then they can ask all the people standing around doing nothing but filming on their cells phone if they are witnesses and want to get involved. I guarantee the response would be, "I didn't see anything". Then the non-witnesses can go home and comment about what they saw.

Let's not become the angry mob that excuses police brutality. Yes, driving drunk is completely inexcusable- however the police have a responsibility to do their jobs in a professional manner and to treat people with humanity and respect. NYC has become a police state and allowing them to act like adolescents with no self control will only serve to diminish our liberties.

@scooby - I'm not worried at all because I don't break the law. Of course police are not perfect & some are probably criminals. You sound like an activist who goes in front of the police & taunts them. If you get some mace in the face it's well deserved. Obey the law ! @anonymous 1054

Spoke with a couple of neighbors who saw the whole thing and learned some new details:

First, there were two other guys in the car with the driver, but they ditched and ran immediately after the crash.

Next, the driver tried to drive off after the crash, throwing it in reverse and trying to back out. I could hear the wheels spinning intermittently in the first few minutes.

As to the police brutality: according to the people I spoke to it took nearly 8 cops to take this guy down due to his size (somewhere between 250-300 pounds) and his "high" state", and he sent at least 2 cops to the ground during the struggle. People did wonder why pepper spray wasn't used initially on this guy, but since there were other cops in the area it makes sense that they wouldn't. Apparently a gun was drawn by a cop (which too me seems excessive, but I would think a gun waved in the face is enough to calm a lot of people down.)

Last, apparently there were four other DWI incidents in the EV last night.

My $.02 on the brutality: if the guy didn't lie and say he wasn't driving the car and didn't try to flee the scene then he wouldn't have gotten the beat-down. Without the "brutality" however, this guy would have gotten away. Cops don't mess around when it comes to fleeing the scene. You try it and they take you down and insure you can't flee. Violence, brutality - whatever you want to call it is never pretty no matter who's involved.

Anonymous said I'm not worried at all because I don't break the law.
September 22, 2012 6:06 PM
how perfect that would be, obey the law and the police will not go after you, ever.
if that were the case we would not need lawyers because the the police are such fine judges that they can tell an innocent law abider from one that breaks the law.
i am not defending drunk driving, not at all. lots of folks are killed by drunks (driving or not). i am just opposed to unnecessary violence against anybody, by anybody - innocent or guilty.

I too am against unnecessary violence , but. not all violence is unnecessary. Not saying it applies here because I don't know what happened. But it is a hard truth.

As another data point, there was an accident on 12th street between 2nd and 3rd at about 3:30 AM Saturday morning. I was asleep with my window open when I heard an extremely loud crash right outside my window (I'm on the 2nd floor). I looked outside to find a minivan had smashed into a construction dumpster. The van was disabled and three groggy looking bros piled out apparently unhurt. It didn't take long to realize these dudes were drunk, and after trying unsuccessfully to drive off (with airbags deployed mind you), the cops arrived along with EMS, they appeared to interview the driver and then cuffed him and put him in a patrol car, all without any scuffle. Pretty scary to think that there's all these wasted drivers swerving around the heavily trafficked EV on any given night.

9 Pct NYPD needs to do some East Village Drunk Driving checkpoints 1am to 4am Friday and Saturday nights...Got that Commish...

Note Anon 11:29AM's account of a DWI arrest: Driver didn't deny that he was the driver, didn't resist arrest = no "brutality".

Compare that to the East 11th DWI arrest: driver denied he was the driver, driver made a run for it, driver resisted arrest = "brutality".

Love the NYPD moles up on this message board. Grive, you should take those f*ckers' comments down. Of course it is wrong to drunk drive. But that the NYPD pepper-sprayed a guy already down and in handcuffs, beat him up to get their rocks, and went so far as to pull a GUN, is extremely disturbing and totally unacceptable. We are entering a police state here - if you look closely you can ever see your civil liberties getting slashed off the master plan and this kind of behavior needs to be objected to IMMEDIATELY or it just becomes rampant and accepted. Now let's look at the bigger picture. Over the past 7 years Bloomberg created a full-fledged mardi-gras out of our beautiful little neighborhood where zoning restrictions are blatantly ignored as our streets become drowned in bars serving staggeringly awful crowds, entirely bereft of concern for anything outside of their own self-important orbs of delusion and distraction. Now intentionally remove ALL police presence to let these hooligans know they have their way with the neighborhood, just in case they had any doubt. And here I am, with more disdain for the NYPD than any other group in NYC, ironically begging for their presence in my own backyard. They should 100% be doing checkpoints - and they should have cops driving around, and on the streets as well, especially on the weekends, you know, "maintaining the peace" I believe it's called, and generally doing cop-like things... That they have created this powerful enclave of unbridled drunkenness and intentionally removed all oversight from the area shows how Bloomberg and Kelly and recklessly endangering the entire neighborhood and its visitors for their relentless greed-driven quest for power and money at the (sometimes fatal) expense of us all.
STOP THE MADNESS

@ Glamma: You advocate Grieve "taking those F*uckers comments down"? Wow,that sounds like a pro police state comment. Yea,all comments you don't agree with should be removed. Your hypocrisy is laughable.