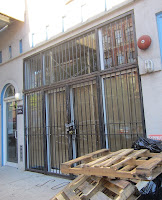 There has been some activity of late at 104 Avenue B near East Seventh St., where SOS Chefs closed in June 2011. The high-end specialty shop, which opened in 1996, sold an array of obscure spices, dried fruit and exotic oils that won them a loyal following that reportedly included Momofuku’s David Chang and Prune’s Gabrielle Hamilton.

When the store closed, a sign appeared that read in part: "We are going to take some time to discover new things, and to see what the next steps may be in the evolution of SOS Chefs."

Apparently owner Atef Boulaabi has had time for that discovery... according to an EVG reader who lives on the block, the store will reopen on Oct. 1. No word yet if the store cat will return.

Previously on EV Grieve:
SOS Chefs, high-end supplier to A-list restaurateurs, is closing on Avenue B
Posted by Grieve at 6:30 AM

Email ThisBlogThis!Share to TwitterShare to FacebookShare to Pinterest
Labels: Avenue B, SOS Chefs

O Happy Day! I am so happy to read this news!
This and Zoltar, can my Monday get any better?

Walked by there a few days ago, they said yes, the cat will be back

the cat is still there

Bush had his thousand points of light.( Thanks Peggy Noonan ) I have a handful of points of light on Ave B and SOS chef is surely one. It's so great when something you love goes away and isn't replaced by something that sucks. I am really happy that great family is back with their mysterious offerings.

They anticipate opening as soon as next week, and have changed their focus from restaurants to general grocery. They reassured me that they will continue to carry their awesome stock of mushrooms, and that the selection of grains and spices will remain as it was before. ... I'm excited.