What happened to the sidewalk bike mechanics? 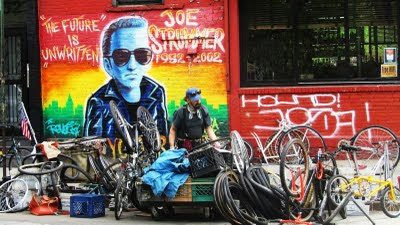 [Photo from spring 2011 by Bobby Williams]

A reader asked us if we had seen Peter Corbin, aka the Bike Man, who usually sets up shop outside Niagara during the summer.

Now that summer has come and gone ... No, we don't actually recall seeing him in some time. Ditto for Natividad Zirate, who was fixing bikes around Houston and Second Avenue. As you may recall, the Parks Department confiscated and trashed his set of tools in May 2011, as BoweryBoogie reported. A Good Samaritan came forward with new tools for Zirate.

In a feature from 2009 on Corbin and Zirate, the Times noted that:

Both men said they had a friendly relationship with the local police, but the official status of their shops is tenuous to non-existent. A permit from the Department of Consumer Affairs is needed to sell anything besides food on the sidewalk, which neither could produce. The city caps the number of permits at 853 for non-food vendors, and the waiting list for a new permit is so long and turnover is so slow, the department has stopped accepting new names.

Perhaps the Bloomberg Administration cracked down on them for good? This DIY-business mentality is certainly at odds with the direction the city is headed. Anyway, does any reader know what happened to either Corbin or Zirate? Let us know in the comment or via email.
Posted by Grieve at 6:45 AM

Not sure if its them, but some bike mechanics have set up shop on the street on 9th between C and D, across from 9th st expresso.

I saw Mr. Corbin in early Summer once or twice, but he definitely hasn't been there in several months.